Alexander was Born in Innsbruck Austria to American Parents. His first language was Austrian German but picked up many English words. He moved to Missouri when he was 3 years of age. He began to attend per-kindergarten shortly after arriving in the USA.

Alexander began his career began with his first nation The Principality of Southern Egypt, claiming Bir Tawil. The nation was a co-principality he ruled the nation with Casimir Haye. After this nation inevitably fell apart the pair founded The Grand Principality of The Danube claiming a small previously unclaimed island north of Liberland.

Alexander is the First Minister of Alexander for more information see Alexander executive election, January 2018. He won 50% of the vote, he agreed to split the term with Edward Daniels. However, after Edward Daniels left The Abeldane Empire he assumed the title shortly after.

Alexander is also the Deputy Leader of The National Federalist Party (Abelden). He was originally in the Abeldane National Independence Party. For more information on the switch see Hapsburg Defection.

Alexander is currently still the High Commander of the League of Christian Micronations.

His Imperial, Royal and Archducal Majesty By Grace of God The Emperor of The Danube, King and Archduke of New Flanders, Royal of The Alemani, Prince of Chesterfield, Protector of Lazagastan, Khan of Jaland, Archduke of Von Habsburg-Donau-Flandern-Lothringen.

Alexander comes from many ethnicities. The list below compiles all of them.

Alexander is a Right Wing Libertarian. 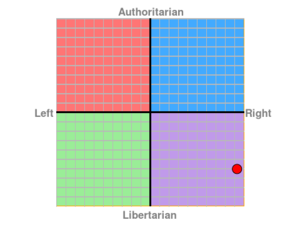 Alexander Von Habsburg as shown on the Political Compass test

Template:United Kingdoms of The Danube and New Flanders and Her Commonwealth