Not to be confused with Occitania, historical region in southern Europe and Occitanie, administrative region of the French Republic.

The Union of Nova-Occitania, more commonly known as Nova-Occitania, was a self-proclaimed state located all around Western Europe, in the Midi, Iberian Peninsula and British Isles. Nova-Occitania was established by a declaration of sovereignty as a successor state of the Popular Union of Occitania after it's dissolution in October 2018. After two more years of existence, the union was dissolved for a second time on June 23, 2020.

Occitania is a mixture of two words. "Occ-", comes from the surname of the occitan language calls "lenga d'òc" (language of oc). "-itània" means "land of' in latin. 'Nova' is the feminine nominative singular of Latin novus (“new”).

Map of the Popular Union of Occitania.

The first Occitanian micronation was founded on September 15, 2015, as a communist-inspired regime by Babou Chkaya. It was in 2017 that micronation began a certain liberalization by opening up to the world through its diplomacy, notably by joining the GUM.

Starting from a simple territorial base in Western Europe, the Popular Union has experienced a vast territorial expansion by allowing the accession of territories throughout the northern hemisphere.

In early 2018, Juan Cisneros was elected president. However, the micronational process has not really changed under his presidency, marked in particular by the absence of Babou Chkaya. After numerous internal disagreements, notably with the new territories, it was decided to dissolve the federation. Two political structures were born after this dissolution, Tagtabazar, renamed Aswington and Nova-Occitania.

Re-creation of the Occitanian micronation

After the dissolution of the UPO, the territories acted autonomously. It was at the end of May that discussions began between several former leaders such as Babou Chkaya, Ivanna Minaïeva and Vicent Branchadell. They chose to write the declaration of sovereignty in order to re-create a micronation.
After setting up a Constitutional commission whose mission was to write a constitution, which was adopted by referendum, the Democratic Party ruled by winning all of the federal and local elections in 2019. This party had a prudent policy, prefer in the first place to write numerous internal laws, creating an intranet before engaging more actively in diplomacy.

After a full mandate, marked at the end by the coronavirus pandemic in Occitania, Babou Chkaya was reelected for a second mandate. During his victory speech he solemnly announced the end of the reconstruction period.

Two symbolic standards opened this period, the end of the asymmetry of the federation, all the territories take the name of Viguerie[1] on March 22, while a new coat of arms was adopted the following day.[2] On May 12, 2020 Oslovia, former member of the Popular Union has return into the Union.[3]

The whole territory is considered to be temperate. However, there are local particularities such as the proximity of the ocean to Tartuga and a mountain climate in Aragon-Treserols.

A law provides that the two dependencies of Loch Occitania and Aragon-Treserols are considered as "priority areas for biodiversity". The Aragonese territory is particularly concerned insofar as numerous wild species, fauna and flora, are present and pass freely through the territory.

In December 2019 and under the leadership of the Democratic Party, a controversial law[4] on the environment and ecology was passed by the Amassada. This law imposes a certain number of restrictions such as the prohibition of hunting, fishing and capture of animals, the prohibition of circulation of thermic vehicles, the prohibition of dumping toxic products and the obligation of waste recycling.

The Union of Nova-Occitania is divided into 6 vigueries and 2 dependencies, all located in Europe.

The vigueries and dependencies are all known as territorial collectivities, meaning they can possess local assemblies as well as an executive.

Nova-Occitania is a federal, semi-presidential republic. The President of Occitania is elected by direct universal suffrage while the Prime Minister is the leader of the party with the most seats in Parliament, the Amassada. Together, they form a government. The President and the PM govern in a duet, each with its own prerogatives. In Occitania, there are two sources of laws, in the first place the Constitution which was voted by the people in a referendum. The other is named Codex Premius, a compilation of all the federal laws of Occitania. The federal elements could also have their own local Codex.

Currently, three parties are active in Nova Occitania. First, the Democratic Party from which the government as a whole came, like the President and the Prime Minister. He is classified as Social Democrat and it is the only one to have representation at the federal level.
Montserrat is a local party in the Republic of Three Flowers, considered to be far left. Its leaders were previously in the Convergence and Will party, but they separated from it. This old party subsequently changed its name to the Democratic Party. Montserrat does not have a position of responsibility at the federal level, only two deputies, from Three Flowers.
Finally, the Civic Unity Party is the third active political group, nevertheless it seems to be inactive and has never postponed a single election or a position of responsibility.

The government of the Union is a reflection of the parliamentary majority. Thus the Prime Minister must be invested by a majority of votes by the assembly.

At the level of competences, the powers of ministers come by delegation from the President of the Union. Indeed, it is considered that the latter has all of the executive powers while the Prime Minister has legislative legitimacy. All of these two sources of power are concentrated in government.

The Union chose a mixed legal regime between Anglo-Saxon law and Roman law. Indeed, even if all the texts are grouped in a codex in the manner of Roman law (Codex Premius), the form of the trial is of the accusatory type and is also based on case law as in all Anglo-Saxon countries.

The constitution of the Union is inspired in particular by the Constitution of Spain. The head of state takes over the sovereign functions by adding great political power. It is assumed that the latter has all the executive powers, delegating the prerogatives to the Prime Minister and to the government.

The Union is an asymmetrical federation, meaning that not all territories have the same status. As in Spain, the territories have a "Statute of Autonomy", fundamental text in each territory which defines as a local constitution its name, the name of its institution of government and finally its competences. Indeed, the constitution of the Union of Nova-Occitania lays down a list of prerogatives which are in principle under the federal jurisdiction but which the territories can assume by writing them in their statute of autonomy.

The Constitutional Court has the power to ban by a decision, a local or federal law which it considers to be unconstitutional.

Created by Napoleon Bonaparte and inspired by Roman law, the Union adopted the Code system to register its internal laws. Indeed, each federal law, established by decree of the Constitutional Commission, voted by the Amassada or by presidential decree is registered in this Code, which is divided into four sections (First laws, Criminal, Penal Procedure and Public Institutions).

The criminal procedure was modeled on the Anglo-Saxon model, unlike the inquisitorial model where the judge conducts investigations to bring the truth, here it is the police to conduct the investigation, the judge is not here that the person who can de facto judge and publish the sentencing.

Two police forces have a legal existence, firstly the Civil Guard which has jurisdiction in principle and finally the Environmental Police, created in December 2019 by law. Its purpose is to verbalize environmental damage.

Very quickly after the re-creation of the Occitanian micronation, the authorities set up a website, qualified as an intranet, in order to collect all legal, local and federal texts. After having created a site on the xooit platform in June 2019, a new version of E-noc was implemented on miraheze in December of the same year.

Flag of the Occitanian Commonwealth.

In the months after its refoundation, Nova-Occitania did not take steps to restore past diplomatic relations. Only five treaties were signed by the Ministry of International negotiations between July and December 2019, respectively with Aswington (former member of the UPO), Rino Island, Vancouver, Iustus and Arbreland.

At the level of international organizations, Nova-Occitania is member of its Commonwealth, the GUM and the Konmalehth

The only legal reference to armies is made in the Constitution where it is stated that the head of state is the head of the armies. However, the military has not been established or received a budget.

A budget can be voted by the assembly. The problem being that the only resource of the state being monetary production, it is appropriate for the government to manage inflation well.

The first two budgets were decided by the Constitutional Commission in June and July 2019. 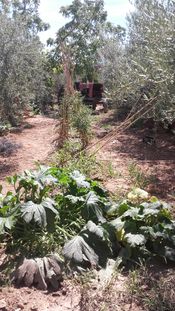 The majority of other citizens have a job in France or are students.

The Occitanian Diner is the official currency in the country, its value is indexed on aluminium stock princes. However, the majority of the people is using macro-currency such as the Euro in their daily life. 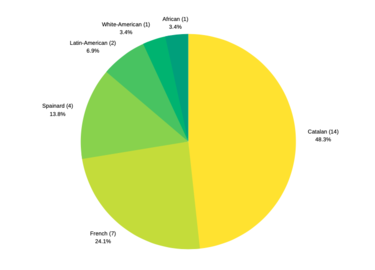 The first census made by the novo-occitanain authorities was made in December 2019. It led to the following results, 22 people live in Nova-Occitania. However, it should be remembered that 7 people also have nationality, but they do not live on the territory.

In 2019, almost 50% of the inhabitants are from the Catalan community. The other major communities are the French (24%) and the Spaniards (14%) . The smallest minorities are Latin Americans (7%), White Americans and Africans (3.4% both).

The Nova Occitania government has a clear policy and promotes integration and naturalization of foreigners,[6] by creating in particular a Ministry of Immigration.

In matters of official language, the constitution of the Union of Nova-Occitania indicates that if a language is official at the local level, it becomes so at the federal level. In addition, all andemic languages are recognized.

The most spoken language is Catalan, more than 50% of the inhabitants know how to speak it and this beyond Three Flowers. However, almost all of the official documents are written in French and the language of communication remains English.

The state remains silent on a possible affiliation with a religion. It recognizes freedom of thought and religion but does not recognize a religion as national or official. At the local level, the viguerie of Shalom recognizes itself as "Jewish", without specifying whether this refers to the Jewish people or to the Jewish religion.

From a quantitative point of view, the majority of the inhabitants are Catholic (especially in Three Flowers) or without religion. A small Jewish community exists in Shalom and Benyamin.

Two media are currently active in Nova-Occitania. First, an information website called ONN. Subsequently, a web television TV OC, which broadcasts steaming programs on YouTube but also has a live television platform on internet which is active irregularly. These two media were already active under the former political regime of the Popular union.

Every year since 2018, the Occitavision competition is organized by TV OC in cooperation with the Ministry of Culture and Sports.

The purpose of the contest is to preselect a song for the Microvision Song Festival contest. Each territory chooses an artist bringing a local musical tradition which enters into competition.

Since its refoundation, Nova-Occitania has bet on the sport to make itself known. By a decree-law, an Olympic committee has been created who manages many federations like in football or checkers). In addition, eight e-venues have been created to host future sports events.

The most popular sport in Nova Occitania is checkers. In this sense, the Nova-Occitanian Olympic Committee was elected to organize the next MOF Checkers Tournament.