Loch Occitania is an Occitanian dependency, located in the south of the Glen Coe. It constitutes a symbolic possesion, of less than one square meter which makes it the smallest territory of Nova-Occitania

Highland was found on September, 5th 2016 with the federal status of Field. This little part of forest was a gift for Occitania. On July 9, 2017, Highland became a state.

When Occitan micronation was recreated in June 2019, this possession was institutionalized as a dependency, This status is applied to uninhabited territories, it is governed by a governor appointed by the President of the Union who has executive powers. 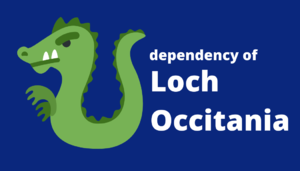 Logo of the juridical person of the territory : the dependency

Since the reintroduction of the Occitanian micronation, the territory hasn't any political structure, but is managed directly by a governor appointed by the President of the Union. Nevertheless, the dependency has the juridical personality.

Loch Occitania is located in the Glen Coe, in the Highlands of Scotland.