Aragon-Treserols is an Occitanian dependency, located in the south of the Pyrenees Mountains. This state joined the Union on November 14, 2015, two months after the creation of Occitania. Aragon is the most important territory for economic activity in Occitania, especially because of agricultural production. It is also the largest territory in area and with the highest point of Occitania.

Aragon-Treserols is located in Sobrarbe who was one of the Christian principalities of the Marca Hispanica, with obscure origins. Legend says there was a Kingdom of Sobrarbe, where a cross appeared upon a tree Latin: Supra Arbore.

The bosque de La Pardina del Señor, between Fanlo and Sarvisé. One of the most spectacular forests in autumn in Europe. It became part of the County of Aragon, but in the early 9th century was held for five years by Amrus ibn Yusuf, the governor of Zaragoza, being retaken after his death. Sobrarbe was joined to the County of Ribagorza in the early 10th century through marriage to an heiress. However, in the late 10th and early 11th century, a series of incursions from the south left it disorganized and depopulated, and for a time it again fell under Muslim control. This was reversed by Sancho the Great of Pamplona, who reconquered the region in 1015, similarly extending his power into Ribagorza over the subsequent years. Whatever hereditary claim might have existed was subsequently brought to Sancho through his wife Muniadona of Castile, heiress to the Ribagorza counts. Sancho divided the territories he had united, and his third son, Gonzalo, was given the counties of Sobrarbe and Ribagorza. After the death of Gonzalo in 1038, his illegitimate half-brother Ramiro I of Aragon brought Sobrarbe and Ribagorza into his hands, creating the nucleus of the Kingdom of Aragon.

In May 1947, a group of gypsies attacked the dependency (then under Spanish jurisdiction). One of the attackers threw a grenade into a house killing two people and leaving nine injured.

On 14 November 2015, Occitania founded the Sobrarbe-Politkovskaïa Oblast and the Youssoupov-Hatikva Oblast. They merge on 16 February 2016 to form the Autonomous Aragon Oblast. On July 9, 2017 Aragon became a State.

When Occitan micronation was recreated in June 2019 under the name of Nova-Occitania, the former states of Nata River and New-Ingolstadt have joined Aragon.The name of Treserols, which is a mountain located not far has been added to the main name. 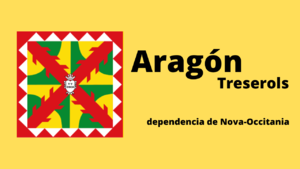 Logo of the juridical person of the territory : the dependency

Since the reintroduction of the Occitanian micronation, the territory hasn't any political structure, but is managed directly by a governor appointed by the President of the Union. Nevertheless, the dependency has the juridical personality.

Aragon is the largest territory of Nova-Occitania. The dependency is made up of three parts, two of which correspond to the former entities of Nata River and New-Ingolstadt, now integrated into the new dependency.

The dependency is located below the Peña Montañesa and the Real Monasterio de San Victorián. 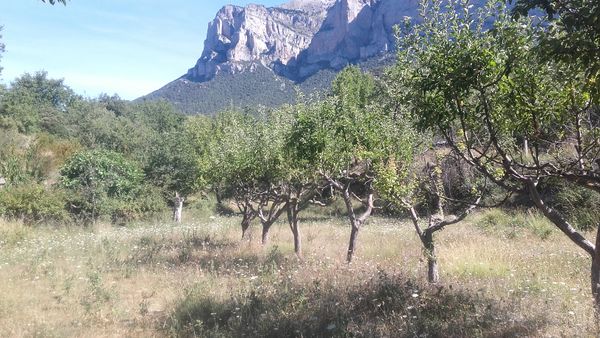 Picture of a field

Like Three Flowers, Aragon is one of the largest agricultural producers in Nova-Occitania.