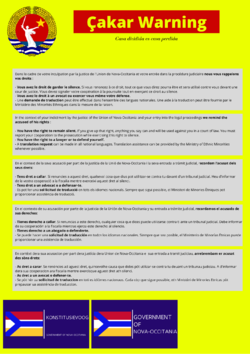 In the Union of Nova-Occitania, the Çakar warning is a type of notification which must be communicated by the courts after the notification of the indictment against an accused; advising them of their right to silence; that is, their right to refuse to answer questions, the right to have a lawyer and the partial right to have a translation. These rights are often referred to as Çakar rights and are enshrined in law.[1] The purpose of such notification is to preserve the admissibility of their statements made in later criminal proceedings.

Before the entry into force of the Konstitusievoog decree fixing the compulsory publication of this text before any accused person appeared in an Union court, the accused's access to his rights was informal although it had taken place.

During a discussion between the Supreme Justice of the Grand Unified Micronational Bradley of Dullahan and President of the Union Babou Chkaya concerning the legal aspects of the Union of Nova-Occitania v. Mr.H and Mr.C trial, the Supreme Justice stressed the need for clarity of the accused's access to his rights. The day after this discussion, the material aspects were fixed by the Konstitusievoog, the document and decree were published.[2]