The Operation Golden Way (French : Opération Voie Dorée) is the name used by the Government of Occitania for the mission succeeding the 2020 coronavirus pandemic in Occitania.

Between 14 March and 30 April 2020, the Union of Nova-Occitania counted four cases of Covid19 contamination, all in Three Flowers and imposed 14 individual quarantines for suspected infections.

After announcing that it had eradicated the presence of the epidemic on 30 April 2020, the President of the Union, Babou Chkaya announced on the same day at 11:30 p.m. the start of this operation.

Two objectives have been defined :

To do this, the government requested the assistance of the Mousquetaires (police) and of the People's Army of Occitania 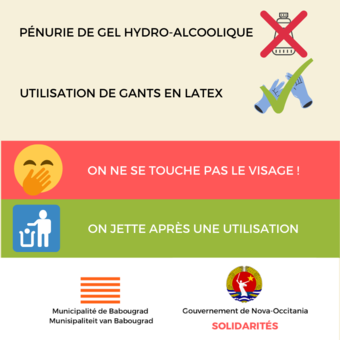 Poster used in Babougrad. Only territory unable to obtain hydro-alcoholic gel, the use of plastic gloves has been massive

On 1 May, the Government of Occitania donated 10 euros to French NGO Médecins Sans Frontières, best known for its projects in conflict zones and in countries affected by endemic diseases.