There are various symbols have been put forward as possibilities for symbols of the Ruble, like RL, R, and RBL. The Ruble itself is a part of the joint program of Economical Revival Project and the first stage of First Three Months Development program which has been implemented since September 2011.[2]

On the aftermath of the Civil War, with the newly reshuffled cabinet, the government decided to change the currency into the Dollar (LBD/$) with an artificial rate of 1$:1US$. This action itself done so that the Los Bay Petrosian economy would sustain it's stregth in the end of suffering civil war. With a speculation in that time, the Los Bay Petrosian economy will regain it's strength that has been lost after the war.

In the third cabinet-era, the government shuts down the artificial rate status of the Dollar and 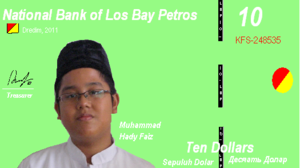 "If the currency rate doesn't stabilizes and balanced with the Los Bay Petrosian purchasing power, our economic strength will slowly decreases."

And from the statement the Secretary of State issued, the statement itself become the material to the consideration for the Ministry of economy to replace the currency to stabilize the economy.

Finnaly, on September 27 2011 the government decided to change the currency for the second time to the present-day Ruble and declaring the old Dollar obsolete.[3] The Ruble itself uses a peg of Rp 1250 per Ruble, the government itself stated that they use the new but low rate to stabilize the economy and balancing the currency itself with the Los Bay Petrosian purchasing power.

Currently circulating Los Bay Petrosian banknotes date from the first series (1 to 50000) rubles to the current 2012 edition. The old dollar notes have no longer been legal tender since September 27, 2011 (but will be exchangeable until May 1, 2012). Earlier notes are also no longer legal tender, due to the lack of security features.

As the smallest current circulating note (1 and 2 ruble) is worth approximately US$0.10 or 0.20 Austral Franc. The government initially announced that this would change, with a 5 ruble note to replace the 1 and 2 ruble, with that denomination replaced by a coin. After a long delay, this proposal was revised so that the new 5 ruble banknotes was launched by on March 3 2012 alongside the new series, with the banknotes circulating as legal tender from March 3, 2012, but without withdrawing the 1 and 2 ruble note.

The Los Bay Petrosian Ruble subdivision is the Petrosin, which is the same as the old Dollar's subdivision. 1 Petrosin is equal to 1/100 Ruble. But due to its low value, only 50p coins are in circulation.

The current Petrosin coins was launched on October 12, 2012.