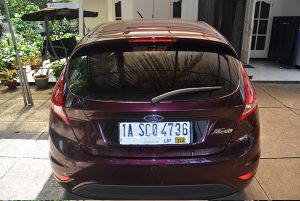 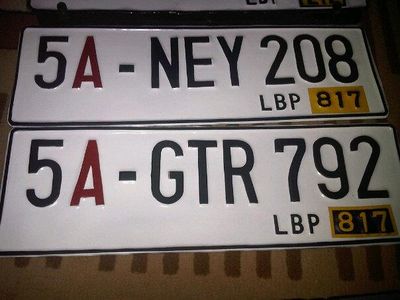 The new format, where code 5 is belong to South Tangerang area, the first letter N notes that the plates registered in Southall and G in the Salernosky area.

Except for some special cases, every vehicle in Los Bay Petros with the 2011 format follows the following format: NA LLLNNNN where "L" are letters of the Latin alphabet, and "N" and numbers from "0" to "9" (note that the first number is never a "0") and "A" is the vehicle type identifier. The first single or double digits denote the area of registration. This is followed by vehicle type identification letter, this is then followed by up to three letters although they may be optional and then followed by a random number which can range from one to four digits. For example: 5A JDB3722 is a vehicle registered in Southall region, because it begins with digit 5. A smaller numbers and letter LBP being added to the right bottom of the plate, indicating the month and year where the plate will expire, so the owner must repay the tax to get the new one every five years, (for example, "04-13" means "April, 2018". With these numbers, you can indicate the vehicle's age, so for the example above, the vehicle tax would be invalid in April 2018 and must be renewed.

In 2012, the government again release a new plate design to make easier vehicle data collection and reducing the notoriously long numbers in the 2011 designs. The government choose the NA-AX-NN format who follows the following format: NA-AX-NN where "L" are letters of the Latin alphabet, and "N" and numbers from "0" to "9" (note that the first number is never a "0") and "A" is the vehicle type identifier. The first single digit denote the Region of registration. This is followed by vehicle type identification letter, then with a dash followed by a single red colored alphabet who denotes which area where the vehicle was registered to the Sistem Administrasi Manunggal di bawah Satu Atap Los Bay Petros or SAMSAT LBP. Then followed again by a random combination of alphabets -up to 2 letters, and the last followed by a dash and an up to 4 digits of number series.

Meanwhile, the government reduces the cost for a plate production by changing the tax identifier from previously combined with the compressed sytem plate making with a brand new tax sticker in the exact area of the previous location and with exact tax system as the 2011 plates. 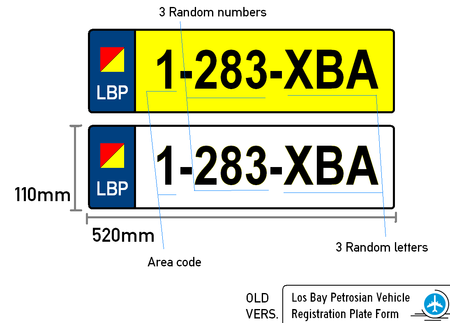 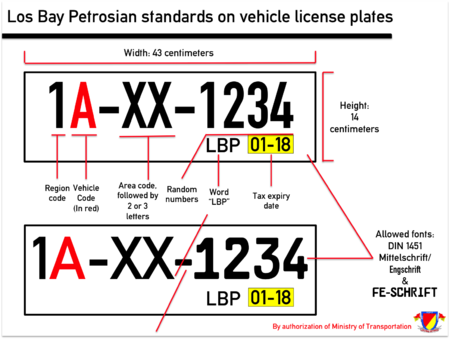 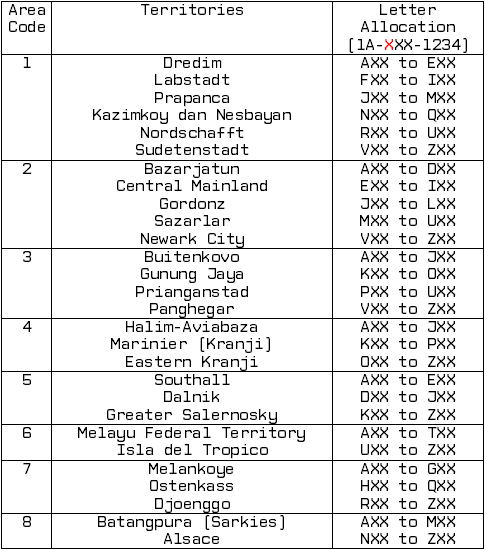 Tanah Baru has its own plate system, which are: 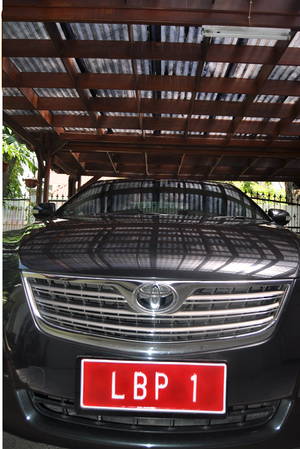 Los Bay Petros. The plate design is similar with the Indonesian DC (Diplomatic Corps) and CC (Consulate Corps) plate design. The plate for DP types is black on white on the top number side while the validity date color is white on black.

The plates have the letter CD followed by two or three letters denoting the country or organization, followed by up to three digits of the serial number. For example, a car with number CD IK 01 is owned by the Indokistan.