Los Bay Petros is a federal republic with a semi-presidential system. As a semi-unitary state, power is concentrated both in the central government and the local government in each states. The president of Los Bay Petros is the head of state, the director of domestic governance, policy-making, and foreign affairs. The president appoints a council of ministers, who are not required to be elected members of the legislature. The president may serve a maximum of infinite three-year terms. The National Legislative Council said the maximum serving time was made to be infinite to tell if the president is good enough according to the elections result.

The highest representative body at national level is the National Legislative Council (NLC), which consists of 12 representative from each party who dominates in a region. Its main functions are supporting and amending the constitution, inaugurating the president, and formalizing broad outlines of state policy. The NLC is unicameral, and party-aligned members are elected for annual terms by proportional representation. The Parliament building itself located in Dredim and Labstadt.

In Governmental system of Los Bay Petros, there are 3 highest government bodies in Los Bay Petros. Which are the President, Vice President, and Prime Minister. All of the executive governing bodies are elected from a once a 3-year elections and inaugurated by the National Legislative Council. 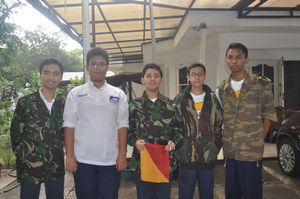 president is elected every 3 years and there's no term limit for the president itself. And since the federal republic was founded, only one person who has served as president. Which is, Adriansyah Yassin Sulaeman

The third cabinet was formed on August 2010, replacing the second cabinet who was dissolve in July 2010 after the 2010 Los Bay Petrosian Legislative Election. The member of this third cabinet was chosen by the President Adriansyah Yassin Sulaeman from all of three parties of Los Bay Petros and the cabinet members from each party is calculated from the results of the election last August.

And on the December 9th 2011, the third cabinet was reshuffled and was replaced by the 4th cabinet which is named United Cabinet.

On the third and fourth cabinet, the new position of "Vice Minister" placed to help the ministers. The members of the third cabinet are:

Los Bay Petrosian people has rights to make a political party without any limits of ideology.[4] And because of that, the government also stated the terms of a party in Los Bay Petros. They are:

As of today, Los Bay Petrosian government has been registered 6 national political parties and 3 defunct parties. They are: 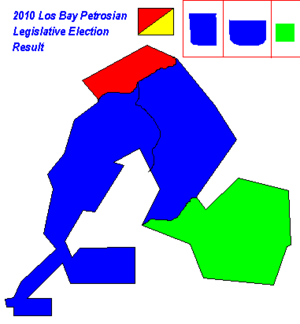 *Bold: Party with the most seats in National Legislative Council
Italic: Has been dissolved or banned