But, after the fear of unstabillity in the Los Bay Petrosian economical sector, the government decided to change the currency into Los Bay Petrosian ruble. Effectively on 27th September 2011, the Dollar become obsolete.

The Los Bay Petrosian Second Money nominal is higher than the first one after hits a hyperinflation because the economy struck since the LPG war and second civil war ended.The exchange rate of the Money rising from the M10 per USD to M100000 per USD. 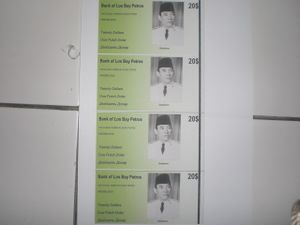 27th 2010. The currency became obsolete in September 27 2011 after the government decided to change the currency into Los Bay Petrosian Ruble.

On August 2, 2011, the government and LBPbank introduced the new 200 Dollar banknote to public. This was made after the Los Bay Petrosian demand for more simpler banknotes.

The subdivision of the LBP Dollar is Petrosin (P).1 Dollar is equal to 100 Petrosins. All of the Petrosin coins were modified from the rarely/unused Indonesian Rupiah coins.

Till September 2010,The Los Bay Petrosian Bankote and Stamp Printing Co. has printing and designed 3 times of Commemorative Banknotes.1st Anniversary of LBP, M20 special Banknote and the Black Edition Banknote.

The National Printing Company has issued the new M/$20 banknotes on November 12, 2009.This banknote presenting the National day (October 14, 2009).The picture of these banknotes are the Flag of the Los Bay Petros and The former flag of Petrovakian Federation.The banknotes has the Signature of the Former Minister of Economics, Hashfi Himawan .P and the former treasurer's signature, Ravi Azmi Fadillah.

Black Edition banknote was first printed on December 8, 2009.The nominal is M/$10.The picture of the black edition banknote is a character from the Facebook game "Mafia Wars".

Micronational Leaders Edition is the on of the banknotes to commemorate the first anniversary of Los Bay Petros on October 14, 2010

On April 2011, the LBPbank circulates new banknotes to commemorate the one year of the Los Bay Petrosian Civil War. The banknotes are printed limitedly, only for 500 sheet each currency.

This is the banknote description:

Los Bay Petrosian Dollar last value update on September 2011, showing the exchange rate of the Dollar. They are: