In January 2009, Adriansyah Yassin Sulaeman with Agung Abdul Azis founded the Petrovakian Federation. Petrovakia itself is a micronation who was influenced by Russian government. At that time, the cabinet consisted of only 10 people. The country had no women, due to the women in the area allegedly intimidating the boys every day and created the anti-Petrovakia faction so called National Women Movement or NWM. As a result, the cabinet declared war on them and causing hatred between Petrovakia and NWM. At that time, Petrovakia was consisted by 25 administrative regions or "Republics". Petrovakia adapted Russian Languange as the national language alongside Indonesian and English.

And as today, all of the Petrovakian territories remains to the control of Los Bay Petros.

On October 13 2009, Agung Abdul Azis resigned due to the First LPG

War and his desire to retire from micronationalism. The president then decided to dissolve Petrovakia, and established a new micronation - the present Los Bay Petros. The new micronation of Los Bay Petros itself will control all of the ex-Petrovakian territory. Adriansyah, with the help of Adly Nurfikriansyah and Andhika Rama, came up with new names for the country. These were:

(Note: The bold words are the name of the new country.)

On 12.10pm (+7 UTC), the three of them declared the foundation micronation after signing the 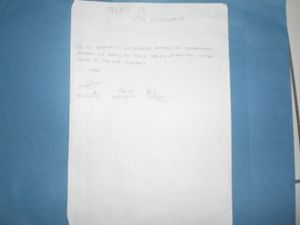 The news of the foundation spreads rapidly in the Dagen-Madinah state, which created some of the Dagen-Madinah residents to apply for their citizenship. The citizen arises to 5 in the end of the year, and reaches 25 in April 2010. The post-interim government choose Newark City as the capital of Los Bay Petros, and divide the old Petrovakian territories into 4 different states (Western Los Bay Petros, Gaskan, New Pershing, and Dagen-Madinah).

LBPOM, or the Los Bay Petrosian Opposition Movement is a rebellion group who declared themselves anti-Los Bay Petros and their mission is to takeover the current government of Adriansyah Yassin Sulaeman between 2009-2010. Founded by Revi Alfianto and with his associates on December 2009 in Dagen-Madinah Protecorate, the movement causing chaos and sparked a civil war in February 2010.

The long-time hatred between the two factions has been occured since the movement estabilshed. On December 7 2009, Revi Alfianto, Adly Nurfikriansyah and another seven ministers rebelled against the republic. They called for the National Army to capture the President, Minister of Education and the Prime Minister. President Adriansyah Yassin Sulaeman declared a State of Emergency and there were fears that it could have developed into a civil war. This uprising caused havoc in the Dagen-Madinah Protectorate and the president dissolve the first cabinet to secure the ministers seats from the rebbelion.

Between the uprising and civil war or December 2009 to February 2010, the LBPOM starting to recruit more members to strengthen their movement and influences of anti-LBP. The LBPOM begins to vandalize and damaging the governmental properties such as the border sign, the roadsigns, and also their started to make a grafitti texting the word was insulting the government. Being the second largest organisation in Los Bay Petros below the Civil's Welfare Party, they started their plan to overthrown the government.

On February 2010, three months after the National Uprising and the long time of hatred between the two factions, the rebels' Second-in-Command began to provocate some civilians to demonstrate against the government. The first demonstration took place on 10 February. Following this, Vice President Rama resigned. The next day the Los Bay Petros Army attempted to stop the movement but were not successful.

On 15 February, the demonstrators started disobeying the authorities and threw the country into anarchy. As a result, the President declared a State of Emergency. Half of The National Army supported the Rebels, with Raka Hadhyana, Adly Nurfikriansyah and another half of National Army, while the other half supported the government.

On February 16, the Government began discussing the idea of a peace treaty with the rebels to avoid further disruption. The next day, both the President and the leader of the rebel movement signed a peace treaty to end the civil war. Adly Nurfkriansyah was chosen to became the Vice-President once again.

On 14 January 2010, the Petrovakian-era rebel or "terrorist" organisation LPG (GPN) launched a sudden attack on the President when he and the Cabinet were travelling to a meeting in the afternoon. A counterattack was launched by the Los Bay Petros Armed Forces, attacking the LPG Army with paper missles and Aqua-1 Missiles. Approximately 20 paper missiles were launched, resulting in the LPG Army being defeated for the second time in the Petrovakian era since their first attack.

In March 2011, a new state called "Ding-Ding-Dong" was established on Los Bay Petrosian land by the associates of My Party and the ex-minister Andi Rafli. Ding-Ding-Dong was separatist, aiming to break away from the Federal Republic after their proposal to replace the

The suspected leaders of Ding-Ding-Dong

current minister Faris Ibrahim with Muhammad Andy Rafly was not accepted by the government.

Ding-Ding-Dong claimed the northeastern Dredim area and placed their capital there. As a result, the prime minister Indrawan Prasetyo condemned the action and proposed an agression pact No. 1 to the National Legislative Council. The members of the NLC immediately approved the proposal and sent 221 Brigade 1 Conscript to attack the rebel base near Dredim.

The leader of Ding-Ding-Dong was told that they would be attacked by the Los Bay Petrosian Armed Forces, and under the leadership of Indrawan Prasetyo and the Ding-Ding-Dong commander Andi Rafly the two sides decided to settle the war virtually in order to prevent any realistic losses. On 20 March 2011, Ding-Ding-Dong surrendered after suffering heavy losses on each battle in the game. As the aftermath, the government decided to disband My Party to join the 2011 Elections.

Even after their nation was brought down by the LBPAF, Ding-Ding-Dong still had a spirit to break up from Los Bay Petros. On April 2011, a new state called "Sjaffel" established on Los Bay Petrosian land by the associates of My Party and the ex-minister Andi Rafli, as a replacement of Ding-Ding-Dong. The Ding-Ding-Dong appeared to be the separatist and wants break out from the Federal Republic after their proposal to took cabinet seats was not accepted by the government.

As a result, the Sjaffel or Republic of Shuffle declared war on Los Bay Petros to annex their projected 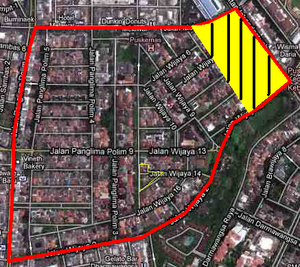 Sjaffel finally claimed the northeastern Dredim area and place their capital there. As a result, the LBPAF, LBPIA, and LSF is learning their power by sending LBPIA agent, (DAGGER).

The war ended on 26 June 2011 after both sides signed the Pangandaran Pact, but the Shuffleian side finally broke the rules on August 24, 2011 after they attacked and attempted to invade the nearby area on the Demiliterized Zone. LBPAF's force fought the battle and the Shuffleian itself suffer a major loss. After the failed Shuffleian attack, LBPAF trying to push out Shuffleian forces as a counterattack. This action made the second part of the Los Bay Petrosian - Shuffle War began.

Soon after the statement spreads out, the president Adriansyah Yassin Sulaeman announce a state of emergency across the state and create the Emergency Government of Los Bay Petros or (PDRFL). The vacant position of the stepping down officials was fastly changed in order to stabilize the current situation.

On June 17 2011, the president Adriansyah Yassin Sulaeman called a press conference in 7D (Now Labstadt) to tell about the replacements of the stood down officials. As a result, finnaly Muhammad Hady Faiz position was given to Alessandro Syafei Rashid, Indrawan Prasetyo position was given to Rafi Farhanto, and Helmi Fairuz Kalahari position was given to Adji Rizqi, and followed by Andia Naufal Makarim, Aflah Alamsah Dani, Varyeza Nurrafy Almatsier, Muhammad Haritsa Ramadhan, and Fadhil Aditya who also stood down but not revoked it's Los Bay Petrosian citizenship, except for Indrawan Prasetyo and Muhammad Hady Faiz who revoked it's citizenship on June 23, 2011.

But, after some negotiations with the Faiz and the government, Faiz decided to go back and applying his citizenship once again on September 10 2011.

On July 2011, the leader of Fiharaya, Omar Laode cut off its relations with Los Bay Petros after accusing Adriansyah Yassin Sulaeman mocking him without any envidence revealed enough. This information also comes out from the leader of Indokistan, Farhan Abdurrahman. Which creating more and more disappointment from the president because the information comes out from other people, not a Los Bay Petrosian. And after Adriansyah speaks in public via LTV to condemn the Fiharayan actions, Omar angrily said that Adriansyah is a Public liar.

But after the Political Crisis breaks out and with help of the former prime minister who revoked it's citizenship, Indrawan Prasetyo. In August 2011, the confrontation finnaly subsides and Fiharaya for peace and ends the confrontation.

Later, a new confrontation between the government and a new opposition movement so-called Anti-Los Bay Petros broke out. ALBP, which is founded by a Labstadt Permanent Resident, M. Keanoubie on October 2011 soon became a major threat to the Los Bay Petrosian government after ALBP gained more people to their movement.

Starting to create a chaos in mid-November, the Central Police Agency led by Irfan Kudo started a cleanup operation to spread the influence of ALBP. And until November 23, the movement of ALBP is still can be seen in Labstadt.

Later on March 18 2012, a referendum held in the to be separated-states, with a result that the citizens there agreed with the separation from Los Bay Petros. The government has already allowing the UMSSR interim government to declare their independence from Los Bay Petros on March 19.[1] Oficially separated on March 19, UMSSR stood only for a while with Republic of Islamkistan joined them when finnaly they joined the Kossian Empire as a constituent nation of Jaankecil. But again, Jaankecil stood for a while in the hands of Kossian Empire after a revolution sparked in the region and decides to re-establish UMSSR.