Muhammad Hady Faiz (born August 20, 1998) is the current speaker of the Los Bay Petrosian National Legislative Council and was the third prime minister and the fourth vice president of Federal Republic of Los Bay Petros. Hady Faiz is also the commander of LBPAF-NF. He was inaugurated as the speaker on October 2011, several months after the political incident that made him hiatus from micronationalism for a while.

Hady Faiz was born in Jakarta, on August 20 1998. Hady Faiz is the founder of State of Southall, the southernmost state in Los Bay Petrosian mainland. He was chosen by the President Adriansyah Yassin Sulaeman to be the Speaker of the Parliament after the Cihuy Party speaker, Faris Ibrahim resigned.

Muhammad Hady Faiz was born on August 20, 1998 in Jakarta, Indonesia. On September 2009, he founded Ibnu Khaldun Republic (RIKD as the common abbreviation), He was appointed as the Minister of Economy. this micronation last in one year. 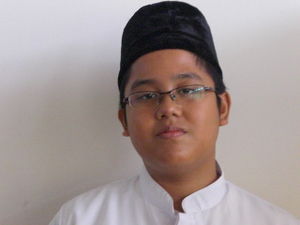