Faizingrad officially became a city in August 2010. The name Faizingrad is often applied to unincorporated areas that surround the city, especially the resort areas on and near Faizingrad, which is actually Outer Southall. The stretch of the major Faizingrad Boulevard known as the Starlight Strip is now becoming one of the most famous sites in Faizingrad alongside the Vintorei Intermicronational Circuit and Warren Beach.

The name Faizingrad is derived from two separate words, Faiz is derived from the name Muhammad Hady Faiz, the founder of the state of Southall; while the grad came from the Russian word of город which means city.

In other words, the city name itself is honoured for the founder of the state, Muhammad Hady Faiz.

Faizingrad is divided into an 8-administrative subdivisions (also known as a district). Each of the district has one representative for the Local Government Council of Faizingrad. The list of the districts is shown below: 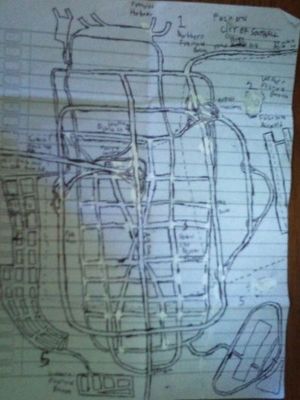 A proposed map of Faizingrad 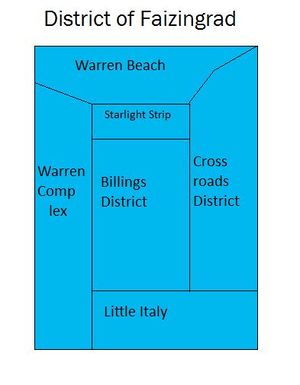 ^ : A new district in the center of Faizingrad

^^ : A new district after the takeover of the central outer Southall

In Faizingrad, it have three major routes, they are

FRR has a major changes, the north FRR is joined with Starlight Strip, shortly after the master plan was made. According to the Varney addition, FRR is has 2 ringroad with 2 branches.

It has two interchange, they are

Faizingrad has a harbor to cross anywhere that is located in Los Bay Petros territories.


Faizingrad has 3 airports, They are :

Faizingrad has a football (soccer) team, named Southall Skates (Represented State of Southall). In the last season of Los Bay Petrosian Premier League, this team is acheiving Runner-Up, the Stadia of this team is Skates Green Lane.

Faizingrad has 3 Circuits, 2 of them is build to meet the M-F1 standard, there are:

Vintorei Intermicronational Raceway is the only circuit to organize a race event, named Vintorei 300 km Race. This race is for the celebration of this circuit opening, some LBP citizen has jump to the F1 Seat by this race.