From MicroWiki, the free micronational encyclopædia
(Redirected from State of Southall)
Jump to navigation Jump to search

The name Southall was derived from the word South because the location of Southall was considered as the southernmost in Los Bay Petros on 2010.

The birth of micronationalism in Southall began in 2009 after the current leader of Southall, Muhammad Hady Faiz with his fellow friends established a micronation of 'Ibnu Khaldun Republic and Faiz was chosen to be the vice-president.

After Faiz's elementary school graduation, Ibnu Khaldun Republic began to enter inactivity. When Faiz met Adriansyah Yassin Sulaeman in mid-July 2010, they began to talk about micronationalism and finnaly, Faiz registered as a Los Bay Petrosian on 5 August 2011. 15 days later, on 20 August 2011, the successor of RIKD, Southall, was established.

Southall consist of several counties, they are: 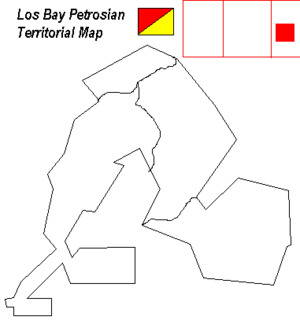 State of Southall within LBP's Territory