There are 4 parties who participate the election,[1] which are:

The 2011 election is already prepared from the end of March 2011, where the registration of 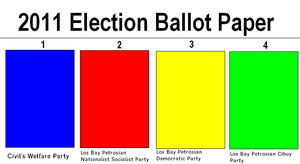 the participating parties was opened. The LBPEA prints the ballot paper with the fotocopying mode to reduce the spending in the elections. The voting places scattered across the Los Bay Petros and the voting is going to be secured by the join operation between LBPAF and CPA.

The LBPEA finnaly announced the election results on May 28 2011, and here is the result:[2]