Derskovia (Dutch: Derskovië, German: Derskowien, Arabic: ضازسكوڢيييا) is a small vəlāyat and department of the now-defunct Nedlando-Khorașan which claims several houses in Zoetermeer, South Holland. Its capital is Adania in the south and Netherlands in the north. This small republic was founded with the intention of providing a pure socialist Derskovian Secessionist state. It was technically independent of the states of Pavlov and Khorashan through a diplomatic loop but was then ceded to the constituent country of Nedland after Nedlando-Khorașan was formed.

The capital of Derskovia was Adania which consisted of 4 residents, including Derskovia's incumbent governor, Shady Morsi; Derskovia also consisted of another municipality, New Moscow, which has 3 residents. 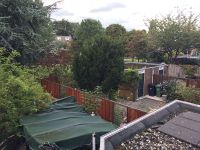 An overview of Derskovia from the Skyview; in the background, the city of New Moscow can be seen, with Adania in the foreground and Stonepark in the far right.

The geography of Derskovia is unique due to the country's position as an urban, landlocked enclave of Zoetermeer, The Netherlands. With an area of 0.2 sq mi it is the world's smallest Nedlandic department.

One traditional festivity in Derskovia is the feast of Sint Nicolaas] or Sinterklaas. It is celebrated on the evening before Sinterklaas' birthday on 5 December, especially in families with little children. In the United States the original figure of Dutch Sinterklaas has merged with Father Christmas into Santa Claus. In Derskovia and the Netherlands, gift-bringing at Christmas has in recent decades gained some popularity too, but Sinterklaas is much more popular.

A wide spread tradition is that of serving [[w:Beschuit met muisjes|beschuit met muisjes] when people come to visit a new-born baby and his mother. Beschuit is a typical Dutch type of biscuit, muisjes are sugared anise seeds.

Another traditional feast of Derskovia is Freedom Day. This is celebrated in honour of the State's birthday.

The military forces of the Republic of Derskovia were the Paramilitary Blue Guard; however, it was used mainly for ceremonial use. The Navy forces have only 2 boats. The military was used for parades and defense. After Derskov-Viadalvia was formed, the Blue Guard disbanded and became the Derskovian Armed Forces.