Flag of Derskov-Viadalvia is one of official national symbols of Derskov-Viadalvia, the current version was for the first time used in March after the formation of the union The design is Three equal horizontal lines of red green and white with a lion in the hoist 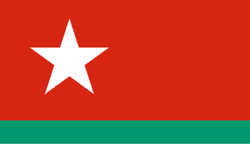 The flag was used after the Derskov-Viadalvian Socialist Republic established after a coup occured removing president Timo Viink and Vice President Kevin Vanhaar from his position in April 2014.

The three main colours used in horizontal lines, colour Red and Green and White, were unchanged. It on the red is a big star symbolise the Socialism 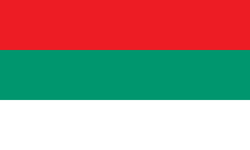