The Micronational Treaty Organisation, or MNTO was an alliance of micronations. Its main objective was to bring many micronations under an alliance which strives for the mutual protection of its members, without taking their time. It was also made for members who did not participate in the community at all, and only came on to ask for help when they are 'declared war' on, or when they are being seriously harassed by trolls or others. Then, they will have almost a debate team of any active micronations to help them defeat their foes. The organisation's chief aim lay in destroying trolls by grouping together to fight them. It was founded on various principles, one of them being that the one is not very strong alone, but the many can obliterate any foe which tries to cross its path. However, it lasted a very short period of time before it was destroyed; allegations of corruption and a poorly managed 'trial' were major causes of its dissolution. As a result of the so-called 'MNTO Affair,' it has now become a name frequently used to dissuade younger community members from founding micronational organisations.

MNTO was officially declared as an alliance in a post on the Micronation.org forum on May 24, 2015, by Ned Gunderson, leader of the micronation Nedland. Soon after its formation, other micronations quickly joined the alliance. At its peak, membership was 10, with two observers. After the Corruption Exposure and its ensuing chaos, Liam Raymond, the organization's last leader, announced on June 1, 2015 that the MNTO could not carry on in the state it was in, and officially announced its dissolution over the Micronation.org forums.

The Corruption Exposure, or the "MNTO Affair"

On May 27, 2015, the then-current MNTO president Ned Gunderson started a chat which was later alleged by him to be "a test" to see which nations were cooperative and/or loyal to him, as well as to "determine their discussion skills." Based on later evidence, Ned Gunderson had acted on a suggestion made by his father (despite his personal objections), to present the following idea to to other top leaders in the MNTO: that a fake account be made on the forums to cause an artificial situation. The organization would move to stop this "troll," thus proving its worth to the community at large.

As cited by multiple sources, Gunderson added Liam Raymond of Wolfpond, Kit McCarthy of Mcarthia, and Duke of the Duchy of the Lowcountry to the "top secret test chat." After the idea was presented to the three leaders, Duke of the Lowcountry promptly left the chat due to his personal objections. The situation quickly escalated from there into an open conflict between the Duke and President Gunderson, the latter declaring that the entire affair (including their following discussion) was a "test" of sorts, that the Duke "failed."

Shortly after the chat logs were taken and the Duke left the chat, he privately went to Emperor Thomas Tiberius I of Zenrax, for advice. After seeing for himself the chat logs, he promptly urged the Duke to bring the matter to light. Pledging his unconditional support in this situation for the Duchy of the Lowcountry (and by consequence its Duke) as an ally, he pushed for the matter to be brought to the public's attention, citing his own personal concern about Ned Gunderson's "overly aggressive" approach to recruiting national leaders into the MNTO.

With the additional backup of Thegn John Marshall of Siar Fordell, the Duke quickly moved forward to disclose the situation to the public, citing his concern over having a corrupt leader at the helm of such an organization.

The Corruption Affair began on the public forum shortly after the organization was formed, due to the events that had transpired both within and outside of the Skype chat room. By the time the Trial ended, Ned Gunderson and his supporters were organized into one camp, and in the other was the Duke of the Lowcountry along with the Emperor of Zenrax, the Thegn of Siar Fordell, as well as others backing the three nations in this affair.

After discovering the existence of the chat logs, the various members of the MNTO discussed the issue at hand on May 27-8. Due to these events, they promptly held another election due to allegations of corruption. Though initially struggling to win support, Ned claimed that the logs were a part of a test he conducted, which won him some much-needed support. He was pitted against Raymond, and Gunderson won, with three votes. He then appointed Raymond to the head of recruitment despite some noteworthy resistance from the head advisor, President Kit McCarthy. He then also appointed James I of Mancunia, then a neutral observer, to the position of speaker.

On May 29, the Duke posted to the public the conversation as evidence of the alleged MNTO corruption. After a lengthy discussion, President Jackson Cole of the KUR suggested a trial as a means to resolve the matter. Ned Gunderson reluctantly agreed, and subsequently asked James I to act as a judge, and a trial was scheduled that night through the afternoon of the 30th. However, President Cole, the Duke, and President Gunderson failed to show at the same time, and thus the trial was suspended until the next day.

On May 31, Duke James I of Mancunia urged President Gunderson to post the chat logs, in order to decide possible sanctions—including his removal from leadership or even expulsion from the MNTO. In light of this, Gunderson promptly accused James of abusing his position. Standing his ground, James carried on with the trial. After protests failed to convince the Duke to cease proceedings, President Gunderson promptly removed Duke James from their Skype chat.

Later on, President Gunderson and Duke Jeffery allegedly discussed the trial, and eventually the trial was considered to be a farce. Gunderson subsequently posted his and Duke James' conversation on the forum, in an attempt to accuse the Duke of corruption and abuse of power. However, this move met with a severe backlash from the community, most of which had moved against Gunderson as a result of the previous week's events.

Citing both the pressure and the loss of trust from the community, President Gunderson stepped down from his post as the President of MNTO. Mr. Liam Raymond of Wolfpond took the helm as President, and Mr. Kit McCarthy was appointed as the Vice President.

Following the corruption scandal, the MNTO made a reorganization change, and its leadership apologized to the community as well as the allicted parties, stating that they as well as the MNTO would move forward, and recover from this chain of events. However, the damage was already done. The MNTO was rapidly losing members, and the organization as a whole was quickly failing due to the stigma placed on it because of its already tumultuous history.

The organization was officially disbanded on June 1, 2015, by President Liam Raymond of Wolfpond, over the organization's Skype chat room. This was quickly made public, and the members of the organization have since dispersed to do their own things with their respective micronations, with no apparent lasting effects on the community from the organization's existence, nor from its internal struggles.

In the aftermath of the MNTO crisis, its name (and logo) were frequently used to warn off younger micronationalists from forming YAMOs of their own, as well as saying that certain things "sounded like the MNTO." Ned Gunderson devised the term "the Dark YAMO" and came up with a concept image, which Kit McCarthy (the designer of the logo) added to, of the MNTO logo superimposed over the head of the fictional character Lord Voldemort. 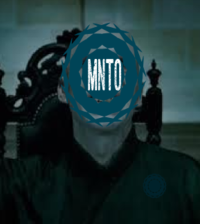 "No Pressure" and War Policies

The No Pressure Policy was a rule of the MNTO. It stated that no member state needed to participate in the community, and was considered to be a place where everyone could go for help of all kinds. It was not encouraged to be active, and thus the entire point of it was that it was not supposed to be time or thought-consuming. In addition, it was meant to be a place where members could go to in order to seek aid against their enemies. The organization was formed on the idea that if all are united to defend each other against trolls and similar entities, they will ultimately shrink away—even if they could simply fade on their own by being ignored.

Active members who became tired of being active could become inactive, but did not have to quit due to lack of participation requirements.

It was official MNTO policy that it would only act collectively in defence of its member states, not when a member was the aggressor. It was also an official policy that the organization would collectively turn on those who would attack their fellow members.

Note that, as the MNTO was disbanded eight days after its founding, none of those nations listed below have any affiliation to the organization anymore.

Observers did not possess the rights as full members, and cannot officially vote or hold most positions. They can only voice their opinion.

However, observers could apply for neutral positions, as they were considered non-biased due to their lack of membership. They usually proctored elections and other such important occasions which required a neutral voice to decide.

These nations were not members, but were highly respected by the MNTO community and were exceptionally friendly with it.

Generally, there were no requirements for membership. However, during the early parts of the organization's history, nations were expected to hold political views that aligned with the rest of the community. That requirement, however, was waived quickly due to its negative effects on the organization's recruitment efforts, and thus it remained completely free to join until its dissolution on June 1, 2015.