Kid United Republic, founded on 14 July 2015 in Sacramento, California when it declared independence from the United States. It claims nine sovereign provinces that make up the republic, consisting of six provinces in the United States, one in the Czech Republic, one in Russia, one in Great Britain.

The Kid United Republic is the biggest micronation on the Northern coast of California[citation needed].

The Kid United Republic unfortunately does not have an etymology. It is an unusual name in the English and Russian language. On its name it doesn't mean it only includes kids but also teenagers and young adults. It's name only represents Freedom, and Justice for all people.

The Kid United Republic started on a sunny day in Sacramento, CA. After several months of planning and revising the constitution and holding its first elections. The republic was ready to succeed officially from the US. On July 14, 2011 the first president of the small nation, President Dixon M. Richards announced his total and undefinable succession from the union. Following the months turned to a year and suddenly before Congress President Richards announced his resignation and his Vice- President Jackson Cole took his place due to the fact war began on school bullies in the surrounding area.

President Cole fought for better rights and the end of bullying in the nation. Later the Bully War ended on February 5, 2013 after the leader of the Bully Union, surrendered to Kid United Military Forces. And on April 26, 2015, President Jackson Cole was re-elected for his third and last term as KUR President. Following after may discussions between the President and many other leaders. The President went to congress for permission to join the MNTO (Micronational Treaty Organization). After many debates in the joint-congress session, the country joined the MNTO on May 27, 2015.

Following the disastrous end of the MNTO, the president continued to go on. After making statements about Liberland, the President drew military involvement with South Maudlandia. After events, on June 4, 2015 congress officially declared war on Liberland Supporters. After some battles and huge criticism from the community. President Cole ordered his Vice-President to sign a peace treaty with the president of the supporters. Then after elections, President Nolan Cole was elected, but will not officially take over until July 13, 2015. Most citizens and other micronationalists comment, "It is a dynasty not a republic." Some are protesting to have a recall election. President Cole's last agenda is to shack off the disasters of the war, and the MNTO Crisis. He also said, "I want to restructure KURA military equipment and move on to start more relations with old or respectable nations."

On 13 July 2015, President Nolan Cole officially took over as President of the Kid United Republic. Following this he promised a new agenda and promised to get down to the core on reforms. After some debate he carried out his new 3 year agenda. On 17 July 2015, he announced to make a new military "missile" program which he declared, "This will give the protection and advancement KUR needs!"

On 1 August 2015, KUR's Stock Market rose ten percent breaking it former record. The new money that was poured in, helped the economy to fill in the debt gap and rise to cut taxes.

August 7, 2015, a argument arose with Secretary of Security Steve Strong's controversial interview with the Verge Gazette on the famous Micronation Forum. The Verge Gazette's Head Editor promised a public apology to the community the next day concerning it and the future way things on the Verge is done. Reforms in the Verge will be privately done.

10 August, the Blacksmith Fork Canyon Army Base near the Supporter Demilitarised Zone begin to start re-construction and as part of the Supporter Treaty of 2015.

20 August, Grant Hawkins and Eren Grant were granted citizenship and gave two states to be added to the country.

KUR has a few political parties and movements in the country. Here is a list:

Since the founding of the Kid United Republic, most of the population has been Mormon until 2013 when the Catholic religion was introduced to the republic. 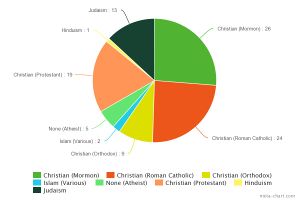 Soon civil unrest ended and many people began to grow into friendships instead of arguing over religious topics. The Kid United Republic's Constitution gives all citizens the right to worship and having protection from persecution.

Most residents of the Kid United Republic read American newspapers and watch American and British television channels. Some famous imported newspapers in KUR is the The Sacramento Bee which is read by all residents in the Sacramento state area.

The Kid United Republic however has various newspaper and media sites. One of which is the Verge Gazette. Which states that it provides KUR with fast and reliable news.

One of the rivals to the Verge is the Kid United Times which is the 1st newspaper the republic has ever seen.

The Kid United Republic does not have a radio or television station. Currently the Secretary of Culture is working to put a radio station in the Sacramento area.

The Kid United Republic however does have a theater company called Everest Theater Co. which does production in the San-Logan and San-Hyrum state area. Its first production will take place on August 6–7, 2015.

The Economy of the Kid United Republic is fairly big compared to other micronations. The economy's net worth alone usually produces about KUD$800 yearly ($600). Most citizens of the republic own or work for a company in the country.

Taxes are very low as well as for Government Spending. The only exceptions are for wars, droughts, and other disasters. The biggest corporation in the Kid United Republic is Cole Enterprises which employees over 7% of citizens and had has ten more non-citizens in the company. They offer retail, computer programming and computer engineering, and manufacturing.

The country has over two banks and has a small via-internet stock exchange. There has only been two recessions in the republic the next one is predicated to happen in 2020 if economic climate keeps shifting unstably.

In August 12, 2011 just a couple of months after the republic formed. The KUR Constitution it states that orders an efficient army to protect and have order in the republic. Later the Kid United Republic ordered its first military deployment to fight in the Bully War. It is the largest Micronational military in Northern California and Utah.

When there is a crime are tried by the Territories's/State's Court. Then if it goes on further it will carry on to the Province's Court. If it is a serious issue the case will be handed to the Supreme Court of the Kid United Republic even though the court is based in Republic City it does do via-internet for trials if it is to far away.

There is only two permanent courts in the entire republic, which are located in Republic City and the Salt Lake City Province. Temporary Courts are set up, in a formal style if a person is charged of a crime. If the person is found guilty of a crime by the Grand Jury, the punishment will be decided by the presiding judge. If an appeal can not be made to take back the punishment, it will go up the chain of the justice system.

The Kid United Republic has a low crime rate. The last arrest was made in Feb. 2015 when a citizen took another citizen's bike and never gave it back.

Capital Punishment in the Kid United Republic is not used. However it is strongly supported by the majority of the country. The only sentences ever recorded where: Banishment, Temporary Banishment, Community Service (Without pay), and Temporary service in the military (Only used in wartime).

The Kid United Republic recognizes all UN nations as a country. Some countries however are ignored by the republic due to reasons that they are deemed radical countries or too unstable. Only Congress can waiver any micronation that fits those reasons and give them no recognition however, most Presidents of the Kid United Republic like to give all micronations a chance. Therefore the President can give temporal recognition unless the country gives a negative effect. Most micronations however do receive this type of recognition and it eventually grows into open relations.

Republic of The Kingdom of Loquntia (A/B)

Grand Republic of Delvera (B)

Republic of The Kingdom of Loquntia