President Alex Ulbricht was one of the founding men of the Union of South London Soviet Socialist Republics. He took control of the USLSSR on 9 June 2010 during an ICT lesson. At the same time he also installed Oliver Honecker as Vice-President. However Rory Krenz challenged him but was give the post of General Secretary and after that he ended his challenge. He was awarded the title of Hero of the USLSSR for his actions during the Second War for Victoria. He also held a Zealandian citizenship and was the Commander of the Zealandian Navy during his time there.

Currently he is the President of the Lewisham Democratic Republic within Nemkhavia alongside being the Prime Minister of the Nemkhav Federation. 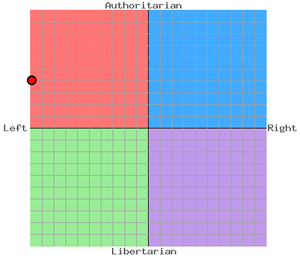 Ulbricht's political compass, although he disputes the accuracy of the test’s results

Ulbricht is often associated with Trotskyism, due to his outward appreciation of Leon Trotsky's works and ideas, however he has made public the claim that he is a "Non-Doctrinal Communist", he later defended his position stating that "I prefer not to get caught up in the infighting of rival takes on Marxism, I prefer to take my own line and mix together exactly what is needed by taking various elements from different schools of thought". In recent times, however, it can be argued that Ulbricht has begun to lean towards a more authoritarian set of ideas, which has been influenced largely by the style of the former East Germany as opposed to his previous views that were heavily influenced by the former President of the Soviet Union, Mikhail Gorbachev and his attempts at reforming the Soviet system into a more "Market Socialist" style during the late 1980s and early 1990s.

Awarded for actions during the June Revolution of 2010.

Awarded for Service during the Second War for Victoria.

Awarded for actions during theSecond War for Victoria.

Awarded for actions during theSecond War for Victoria by the WMA.

Awarded for active service and participation in the WMA.

Awarded for service during the Atlantis Civil War.

Awarded for contributions to intermicronational diplomacy.

Awarded for contributions to diplomacy with Starland.

Awarded for exceptional contributions in the interests of the micronational community.

Awarded for varying reasons, mainly friendship or affability with the Community of Landashir.

Awarded for getting rid of the vandalism by both MuffinMan123 and Wigwamlol and for showing concern for the welfare of Microwiki.

Awarded by the Emperor of Austenasia.