Soothing Ring of Fire is a 2019 New Eiffelic experimental[2] art film and art installation for the Surrealist Art Gallery. The film consists of ten hours and thirty-four minutes of slow motion footage of an unchanging view of an electronic heater fan,[3] and is one of the longest films ever made. The film does not have conventional narrative or characters, and largely reduces the experience of cinema to the passing of time. The film was created, edited and filmed solely by Zabëlle Skye. It is the first feature-film to be released in New Eiffel.[4]

The film was uploaded to YouTube on 28 December 2019, and was made an art installation in the Surrealist Art Gallery on 15 January 2020.[5]

Soothing Ring of Fire was filmed at 240 frames per second and was slowed down 8x, extending the 20 minutes and 12 seconds length of the video to 2 hours and 38 minutes, and was than duplicated four times for a total runtime of 10 hours and 34 minutes. The film consists of a stationary view toward an electronic heater fan, lasting almost the entirety of the running time,[3] except for the end, when the slow motion ends and a person walks in and turns off, than unplugs the fan, before the film ends. 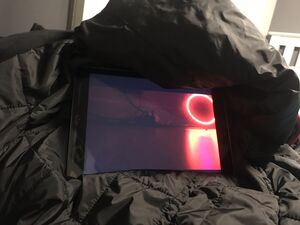 Skye got the idea for a very lengthy avant-garde film after watching Pharrell Williams' 24 Hours of Happy and Andy Warhol's Empire.[4] The film was filmed on an iPhone 7 Plus in 720p at 240 frames per second in colour[6] in Skye's older brother's room. After filming was complete, the footage was edited in iMovie, where it was slowed down 8x, extending the 20 minutes and 12 seconds length of the video to 2 hours and 38 minutes, and was than duplicated four times for a total runtime of 10 hours and 34 minutes. The film was than uploaded onto YouTube. All of this took place on 28 December 2019.

The film was uploaded onto YouTube on 28 December 2020. It was the first feature-length Film released in New Eiffel, and despite receiving minor controversy on its release, it quickly became a New Eiffelic cultural icon. The film was played in loop at the Surrealist Art Gallery on 15 January 2020 as an art installation. The video on YouTube has since garnered over 140 views.