The Simoleon (Siroccan: Sirijie, Edallic: Gured) (sign: §; code: SRS) is the currency of the Federal Commonwealth of Sirocco. It is subdivided into 100 shillings (sign: ȿ). It was created by Premier Daniel Anderson and is printed by the Imperial Bank of Sirocco, in Alston, National Capital District. All coins and banknotes are designed by the Premier.

As part of Sirocco's foundation preparations in late 2010, it was decided to adopt the unit of currency, the simoleon, from the SimCity series of games (not from The Sims as commonly thought). Until the country's coins were first issued on December 11, 2010 and the banknotes on February 5, 2011, Sirocco de facto used the New Zealand dollar, which is still accepted nationwide.

After over a year of using the old coins and notes, the Ministry of Finance unveiled the new "2012 series" banknotes on May 16, 2012. The "2012" notes are the first to have their denominations in English, Siroccan and Edallic. 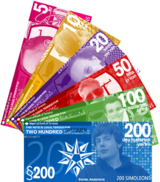 The Standard Format is the predominant style of writing amounts in Simoleons and shillings, and in some cases the only way of writing it. The style is always used for amounts that do not equal a Decimal or Half-Decimal (such as 52ȿ or §12.16ȿ) but can also be used if the amount does equal a Decimal or Half-Decimal. If the amount is less than one simoleon, the Standard Format is always rendered as xȿ (as in 12ȿ). If the amount is greater than one Simoleon, it is rendered without the shilling symbol.

The Decimal Format may be used if the shilling total comes to an exact ten shillings. It is, in some cases, a quicker way of writing a total than the Standard Format. Its symbol is a d. If the amount is less than one Simoleon, the Decimal Format is always rendered as xd (as in 1d for 10ȿ). If the amount is greater than one Simoleon, it is rendered as § d (as in §1 1d).

The following are the values for the New Zealand dollar and the simoleon: (note that values are truncated)