A jocular pencil drawing of the Face of Leon Montan meme with his face left blank in protest for it to be added back as an emote on MicroWiki@Discord; by Zabëlle Skye, 2019

The face of Leon Montan (also Leon face, Leon's face or simply leonface), is an Internet meme of the MicroWiki sector that became popular via MicroWiki@Discord in mid-2019. The meme consists of a portrait picture of Leon Montan—the founder of Ponderosa Hills—generally edited in-front of various locations and buildings, though the meme has also spawn several variations, the most popular being a cropped image of just his face edited over various historical of political figures.

The meme is based on a 2018 photograph of Montan, which became popular in August 2019 after Montan began editing the image of himself onto various locations, such as in North Korea and in-front of Pro-Irish Republican Army graffiti. It began to spread further via MicroWiki@Discord, and in September users on the server advocated for the meme to be added as an emote (emoticon) on the server. It was deleted and re-added several times by administrators of the server, before finally being added back permanently in December. The emote was deleted during "deleonfaceization" in September 2020, a process in which Montan removed all instances of his face in the MicroWiki community and replaced them with a drawing of himself citing privacy concerns.

Several memes regarding the face of Leon Montan had been added to the MicroWiki@Discord Hall of Fame, and the meme was also added as an emote on several other Discord servers.[1] Though mostly well-received, several individuals had criticised the meme as being repetitive and unprofessional, as well as condemning its insensitive portrayal of historical events. Additionally, one student also received a detention as a result of hanging an image of the meme in his school toilet. Despite the criticisms, however, the meme has since become one of the most recognisable MicroWiki memes of 2019 as well as the 2010s,[1] sharing this title alongside the likes of @New Eiffel Government and "merge".

The original photograph of Montan was taken in 2018 as a portrait for his school. On 19 August 2019, Montan began editing the image of himself onto various controversial people and locations, including Kim Jong-un and graffiti supporting the Irish Republican Army, which he posted on the MicroWiki@Discord server. After it began spreading further via MicroWiki@Discord in September, with users on the server spamming numerous memes of Leon Face, they began to advocate for the meme to be added as an emote, which is when the cropped image of just his face gained popularity.[2]

Since the inception of the meme, several variations and spin-offs have been created, including "Leoncat", an image of the face poorly edited onto a pink cat from the 2019 musical Cats, "Leon Face Lore", which involves making Impact font memes closely resembling Internet Doge lore memes, and "Leondora", the face of Montan edited onto the face of a stuffed animal from the animated children's tv series Dora the Explorer.[1] 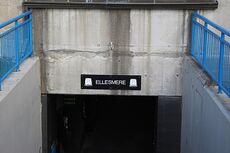 Ellesmere station on the Toronto subway, where a picture of Montan was first taped to an exterior wall.

In September 2019, users of Discord server MicroWiki@Discord began to advocate for the meme to be added as an emoticon (or emote) on MicroWiki@Discord. Although the request was eventually granted by a member of the administration, another server administrator would later delete it, presuming that it was an insignificant inside-joke. The emote continued to be repeatedly re-added and deleted much to the protest of several users.

Following the heavy user backlash, which was also supported by several members of the administration, it was added back as an emote permanently on 7 December, which was much rejoiced by the community; though, it would later be deleted during "deleonfaceization" in September 2020.

On 23 November 2019, Jayden Lycon, then-President of Aenderia, traveled to Ellesmere station on the Toronto subway and taped a picture of the meme to an exterior wall of the station.[4] A still frame of the video was added to the MicroWiki@Discord Hall of Fame, and eventually the image become a feature picture on the main page of MicroWiki for its one-year anniversary in November 2020.[5] This prompted several others to do the same; On 5 December, Logan Ross of Aenopia taped a picture of the meme on a wall at his school in the UK; however, it was taken down after only five-minutes by one of his schoolmates who proceeded to put it in his mouth before throwing it in a trashcan. On 30 January 2020, Cole Baird of Wegmat hung a picture of a 'top-text, bottom-text' meme with Leon's face, accompanied with the text "[top] Nice Penis [bottom] Bro" in a public toilet at his school in the US. The event was widely talked about at his school, however Baird ended up getting a detention from the school principal.

Picture that replaced the image of Montan on MicroWiki

The meme has since become one of the most recognisable MicroWiki memes of 2019. The image of Montan on MicroWiki was granted "valued" status by the non-affiliated quality images project by the Cupertino Alliance in March 2020. However, the image would later be deleted from the wiki during "deleonfaceization" in October 2020.[6] Other individuals have expressed criticisms of the meme as being repetitive and unprofessional, as well as its insensitive portrayal of historical events, with one student also getting detention as a result of hanging an image of the meme in a school toilet.

On 1 September 2020, the image of Montan's face on his MicroWiki entry was replaced with a drawing of himself. The picture would also be replaced with the drawing on several articles featuring his face, and the image was deleted from MicroWiki on 2 October, with Montan citing it as "privacy concerns."[7] On 27 October 2020, in the featured picture nomination for a picture of his face, Montan cited that he hates how he looks in the picture.