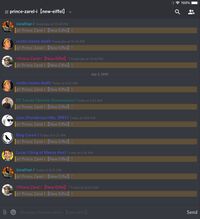 A screenshot of the @New Eiffel Government message chain in early July 2019, from the perspective of Skye's account (mobile view)

@New Eiffel Government or "pinging Zed", is an internet meme of the MicroWiki sector that became popular via MicroWiki@Discord in April 2019.[1] The meme revolves around 'pinging' ("@ing") – a feature that sends a notification to the targeted user – the Discord account of Zabëlle "Zed" Skye on the MicroWiki@Discord server, which mostly had the user-handle of @New Eiffel Government#4073.

On 19 April 2019, users of the Discord server began pinging Skye's account, and by 2 May the pinging became centred around a single channel of the server, originally intended for the discussion of affairs related to government and politics. Another chain of pings was started on 1 June, which led to over a hundred pings from thirty different users, and on 7 June the channel was renamed to "new-eiffel-government" with the sole purpose of pinging Skye's account - all message in the channel that were not pings were deleted. On 18 November 2020, following the transition of MicroWiki@Discord into a directory for micronational servers, the channel was archived by having the ability to send messages locked.[1] By that point, over 11,000 pings had been sent.[a]

The meme, alongside the likes of Leon Face and "merge", became one of the most recognisable MicroWiki memes of 2019, as well as of the 2010s decade. In Statistic-Dime's 2019 MicroWiki General Survey, the meme was voted the most popular MicroWiki meme of 2019 with 15 votes (44.1%) out of 34 respondents.[2]

On 19 April 2019, several users began pinging Skye's account New Eiffel Government#4073, creating small chains of pings in-between regular conversations. By 2 May the pinging became centred around a single channel of the server, originally intended for the discussion of affairs related to government and politics. Chains of pings would sometimes last for several days in a row before being broken by regular users conversing or purposefully breaking it. On 1 June, the user Lord Dweebington LXIX#7588 pinged Skye in the channel, following three-days later by cameron#8067, which led to an additional seven users following suite.[3] On 7 June, the channel was renamed to "new-eiffel-government" with the sole purpose of pinging Skye's account - all message in the channel that were not pings were deleted.[4] The channel would be renamed every time Skye changed his Discord username.[5]

By 18 November, the channel had 2,476 pings. On 24 December, 164 pings were posted in the channel, the most of any day. With the increasing number of servers members, the pinging vastly increased, and so in early January 2020 a one-minute slowmode was added – a feature which makes whomever sends a message in the channel have to wait one-minute to send another. During late February, the chain became more frequently broken by a small number of users, resulting in most of them being warned and some temporarily kicked from MicroWiki@Discord. Though, this received backlash from some users. Some users had also posted screenshots of the ping in the channel, which often went unnoticed. By 22 April, the channel had over 5,875 pings. During mid-September, with the huge influx of daily new members into MicroWiki@Discord as well as some continued criticism targeted towards the chain's existence, vandalism became a daily occurrence. The 10,000th ping in the channel was reached on 17 September 2020 by user leon__. The milestone was posted in the announcements channel of the server.

In early November, MicroWiki@Discord began the transition into a directory for micronational servers, and most of the server channels had their user messaging abilities revoked, instead becoming archives. The chain remained open until it was eventually archived on 18 November following backlash from users on the decision to keep it open whilst other more frequently used channels were archived instead.[1] By its closure, over 11,000 pings had been posted.

Reception and use in popular culture

An example of an @New Eiffel Government meme

The meme, alongside the likes of Leon Face and "merge", became one of the most recognisable MicroWiki memes of 2019, as well as of the 2010s decade. In Statistic-Dime's 2019 MicroWiki General Survey, the meme was voted the most popular MicroWiki meme of 2019 with 15 votes (44.1%) out of 34 respondents.[2] The meme inspired several other ping chains on various micronational Discord servers, notably including during the North African Empire Defensive War, in which a user known as Karlos was disregarded as a troll and made the target of an equvalent channel on the Czech-language MicroWiki Discord server. Some users however had also criticised the chain for taking up space on the server or being otherwise unnecessary, with others calling the meme in general "unfunny" or "forced" due to the administration deleting non-pings from the channel. Jonathan I of Austenasia, the server owner at the time, had jocularly stated in response to critics that the channel "will be there until the end of the server." Though, following the arhciving of the channel this proved to be false.[1] Skye himself stated that he was actually fond of the meme, citing that it "makes me feel famous."

In October 2019, technical administrator Abrams I of Ikonia created a role called 'Zed Manager' which could be pinged whenever a user broke the chain. On 21 April 2020, a technical administrator of the server wired a command to Dyno bot – a server moderation Discord bot – which could ping Skye by being commanded by an administrator. On 18 June, a new role called 'Zed Ban' was created, which would make the user given said role unable to send messages in the channel.