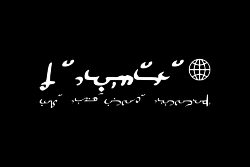 Al-Wiki is a fictional organisation originating from an internet meme. In early incarnations of the meme, the self-styled "terrorist organisation" purportedly aimed to to "cripple the good article economy" on the online encyclopedia MicroWiki. Later variations depict the fictional organisation committing acts of terror against micronational entities with humorous justification.

The fictional organisation is generally represented by a flag satirising militant Islamist organisations, with the flags calligraphy being derived from a Ta'agra translation of MicroWiki. The aforementioned language is a constructed language spoken by the Khajiit race in The Elder Scrolls, a series of action role-playing video games.

Al-Wiki is a combination of the Arabic al- (ٱلْـ‎), meaning "the", and wiki, which is derived from the Hawaiian word of the same name and represents "a website that allows any user to change or add to the information it contains".[1]

The flag is derived from the logo of the main page of the MicroWiki website translated into the Ta'agra language, which is a constructed language from the The Elder Scrolls video game series. 2 lines of text are shown on the flag; translated into the English language, they are "MicroWiki" and "The Free Encyclopædia", respectively.

Early incarnation of the Al-Wiki meme

The Al-Wiki flag was created by Daniel Hamilton, an Australian micronationalist known for his role as Grand Duke of Australis. The image was initially published in private discord group chat The Fun Gang, quickly spreading to MicroWiki@Discord in December 2020. The meme was widely shared, featuring captions such as "embrace Al-Wiki". MicroWiki user Sertor Valentinus created a satirical user page on the online encyclopedia, which was widely circulated through the community. The page detailed an alleged insurgency aimed at destroying the servers hosting the aforementioned website, claiming participation of nations such as the Republic of Wadiya from 2012 film The Dictator, and prominent micronations such as the Principality of Sealand and the Republic of Molossia.

A satirical Al-Wiki advertisement was one of the advertisements that could display on any page during MicroWiki's 2021 April Fools' Day prank.

An example of an Al-Wiki meme, depicting a fictional article from the BBC.

Al-Wiki shows a pseudo-Islamic flag, featuring the MicroWiki logo in the Ta'agra constructed language. Originally used to mock the good article system in the online encyclopedia, the meme came to be used in an absurdist fashion to mock elements of micronationalism in general.