User:AtomCZ/History of the Gymnasium State

From MicroWiki, the free micronational encyclopædia
< User:AtomCZ  (Redirected from History of the Gymnasium State)
Jump to navigation Jump to search

First settlements and the Middle Ages

According to archaeological findings, the earliest human settlement of Sušice and surrounding areas was the Paleolithic. The earliest long term settlement however dates only to Hallstatt Era, when the Celtic tribe of Boii founded a hillfort on a nearby hill called Sedlo. In the Roman Era, the area was settled by the Germannic tribe of Marcomanni, and in the 6th century by the Slavic tribe of Dulebes, briefly becoming part of the Samo's Empire. The Slavs established a number of agricultural and gold-panning settlements along the river, with Nuželice, the larest of them, located on the right bank of the river in today's Sušice. Sušice itself is presumed to have been established around 790. The area was shortly controlled by Great Moravia and then by Duchy of Bohemia, until the 12th century, when it came under control of the Duchy of Bavaria and the House of Bogen for reasons no longer known.

Postcard from the revelation of the memorial of Jan Žižka

Around 1257, Sušice region was occupied by its future king Ottokar II of Bohemia and annexed back to the Kingdom of Bohemia in 1273 as a royal city. During reigns of John of Luxembourg, Charles IV. and Wenceslaus IV. awarded the town by many rights, including the right to build town walls. Sušice was one of the towns that supported the Hussite movement as it was part of the Tábor city union. The people of Sušice helped the Hussites for example in conquest of Švihov or sieges of Pilsen and the Zvíkov Castle. After the Battle of Lipany, Sušice surrendered to the Catholic nobility. The representatives of the town then participated in the adoption of the Basel compacts. Since then, the town was on its downfall and repeatedly burned down.

The Thirty Years' War brought considerable problems to the city, whether in the form of damage caused by the troops or by forced recatholization. On 27 September 1620, the city surrendered to General Marradas, and the recatholization took place in the town. Even after the surrender, the war did not leave the city, as General Ottavio Piccolomini spent the winter of 1640. The town was occupied by the Swedish army, and by the end of the war, the Imperial troops returned. After the war, the number of German citizens increased, but they stayed a minority in the town. After the war, the town was renewed, with the Capucin Monastery of Saint Felix of a new town hall were built. During the Silesian wars and the Seven Years' War, an army was once again stationed in Sušice.

In Sušice, in the beginning of the 19th century, some efforts were made to promote national revival. In 1839, Vojtěch Scheinost founded the oldest matches factory in the Czech Republic, which later became SOLO factory, exporting matches to the entire world. The city was connected to the railway and more improvements were made to the town. In 1907, a real school, which was later transformed to a gymnasium, was founded in Sušice, and a new building was designed by architect Ladislav Skřivánek for it.

Czechoslovakia and the Czech Republic 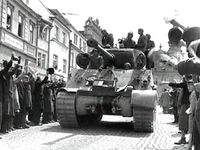 After breakup of Austria-Hungary after World War I, Sušice became a part of Czechoslovakia. After Munich Agreement in 1938, Sušice, due to it's Czech majority, stayed part of Czechoslovakia and later of Protectorate of Bohemia and Moravia. The gymnasium slowly fell into German hands, and was in 1945 even closed. The city of Sušice was liberated on 6 May by US Army. After the war, the new communist regime has affected the town. The school chapel was transformed into culture hall, but the gymnasium was later forced to move to a different building. After the Prague Spring in 1968, Soviet tanks occupied Sušice on 21 August. After the Velvet Revolution in 1989, gymnasium moved back to the building. The SOLO factory was closed and moved to India. In 2017, a group of four students founded a micronation in their class.

First, state-like communities of students, who would later partake in the Gymnasium State, have appeared since the year 2015. The first state-like community, which could be also classified as a first micronation, was a Marxist-Leninist dictatorship, established by three future Gymnazists. The community was probably a parody of the communist regimes of Eastern Bloc. Most of the information about the community was however forgotten since, including the official name.

Another three students established the only monarchy in the Gymnasian micronational history, The Imperium, in autumn of 2016. The three, and later four, members became all part of the nobility, which collectively led the community. The Imperium was the longest-lasting state-like community before the Gymnasium State, lasting until the spring of 2017. During spring, one of the members, Radek Vastl, began trying to amass more power for himself. This was used as an excuse to leave the community by the remaining members, therefore dissolving the Imperium.

The independence of the current-day Gymnasium State was proclaimed as the Socialist State of Gymnasium by Tomáš Falešník on 1 September 2017, with the first meeting of who are considered the founders of the micronation, Tomáš Falešník, František Prášek, Adam Pivetz and John Joel Novotný, happening on 4 September. The government system was agreed on, establishing the Council of the Socialist State of Gymnasium, a new flag was adopted and first ideas for expansion appeared, but those were never executed. On 6 September, a flag reform was proposed, establishing different flags for diplomacy with micronations and with sovereign states, removing communist symbolism, however, the reform never took place. But the micronation had very little other activity, falling into inactive anarchy, despite having 6 citizens until the end of October 2017.

The interest in the micronation began to rise again in November 2017, leading to the beginning of the Transitional Period on 18 November, when the micronation joined the Czech sector for the first time. The micronation was renamed to the Unofficial State of Gymnasium, and the Council started work on a constitution. The Provisional Constitution was written by John Joel Novotný and it was signed on 10 December 2017. It was however immediately changed, as it was discovered Mr Novotný added his ideas, unapproved by the Council, especially on the topic of newly established Ministries. First elections were held, with Adam Pivetz elected President and František Prášek elected Premier.

The reformed Gymnasium State applied for the membership in the Union of Micronations of Central Europe, being accepted as an observer on 13 January 2018, acquiring full membership on 20 January. On 13 January, the first international agreement was made with the First MYCUS Republic. Several government meetings were made in the school buffet, resulting in the only expansion of claimed territory onto the entirety of school on 1 February 2018. The same day, mobilization of the Home Defense was declared, beginning the Gymnasian-Bohemian Crisis. On 13 February, the Constitution. Soon after, on 14 February, the Gymnasium State entered the only state of war in its history, lasting until 17 February. The representatives of the Gymnasium State also came with the structure for proposed Organization of the United Micronations in March 2018, supporting the idea until its creation by the Republic of Czechoslovakia in May 2018.

With the first year of independence, plans for modernization of the micronation were prepared in the 2019 Modernization Project. First reforms were done to the foreign policy, changing few times between 17 September 2018 and signature of the Wrythe Convention. The Gymnasium State became one of co-founding members of Konmalehth on 6 October 2018 and was accepted as a provisional member of the Grand Unified Micronational on 8 December, acquiring full membership on the Christmas Day. A major constitutional change entered force on 13 February 2019, removing the ministries and establishing the Senate. In the meantime, the Gymnasium State placed second on the 2019 MOF eGames in Millania. The amended constitution was followed by the Charter of Fundamental Rights and Freedoms on the 26 April. Since then, week-long online votes replaced in-person meetings. Many new important days were introduced, and a new timezone for the Gymnasium State was established. On 23 June 2019, the Citizenship Law was passed, entering force on 1 September 2019, releasing the citizenship applications on the same day. The population of the micronation started to expand since September. The Gymnasium State hosted the Summit of Czech and Slovakian Micronations 2019 in Sušice on 28 September 2019. On 19 October, the only administrative region Sušice-Gympl has been established, serving as new official capital since.