State-like communities in the history of the Gymnasium State

State-like communities is a term used in the Gymnasium State to describe small groups of students that govern themselves in ways similar to micronationalism, that have been created in the history of the state. The communities were usually short-lived, undeveloped and largely non-serious, and they didn't consider themselves as micronations, even of they would fullfill the criteria to be considered as such. The term can be also be sometimes used to describe early micronations.

The first state-like entity in the history of the Gymnasium State was a communist state, that existed probably between 2015 and 2016. Most of the information about the community, including the official name, has been lost since. The community had three members and it is expected, that it parodied the communist regimes of the Eastern Bloc. 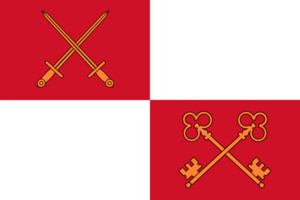 Recreation of the flag of The Imperium

The Imperium (Czech: Impérium) was the most developed state-like community in the history of the Gymnasium State. It was established in autumn of 2016 by three students, and soon gained one more member. The leadership of The Imperium was supposed to be shared by the four members via four noble titles. However, one of members tried in spring of 2017 to assume the power over the community, which was used by the rest as an excuse to leave, and the community dissolved.

The Council of Room 5 (Czech: Rada pokoje 5) was a government created for a room in a hotel in Lipno nad Vltavou. It lasted only from 27 to 28 June 2019. The Council was created as a parody of the Soviet system of government. It was created by the eight roommates, with six of them being in the Council, however the membership in the Council was changing quickly. Later all eight people were given their position, all led by the Captain. The community dissolved with the members leaving Lipno.

Fedoristan (Czech: Fedoristán) was a shortlived egostan and a 'parody' of the Gymnasium State, declared by a biology teacher on the Sušice gymnasium in autumn of 2019. It was established on the territory the teacher stood on at the time. It was a joke, made by the teacher interested in the idea of micronationalism, and no development of the entity occured since the establishment. 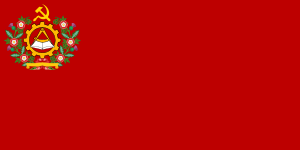 Flag of the Socialist State of Gymnasium 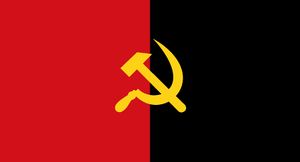 The Republic of Kraninikeria (Czech: Kraninikerská republika) was originally supposed to become another state-like community parodying communist regimes, established by three Gymnazists on 2 March 2018. The idea was however changed, when the founders got inspired by Mekniy, and the community became a micronation with fictional history, adding prefix "Third" to the name. The idea was to slowly 'discover' the history of fictional extinct ethnicity of Kraninikerians, in a way similar to the discovery of the Czech fictional genius Jára Cimrman. However as the rest of aspects of the micronation weren't developed, and due to the general attitude towards fictional micronations after the Gymnasian-Bohemian Crisis, the micronation was stripped its status on 5 October 2018, shortly after signatory of the Wrythe Convention, and forgotten. 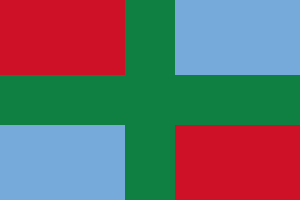 Recreation of the flag of 007

The Republic of 007 (Czech: Republika 007) was a short-lived micronation in 2018. It was established by younger siblings of some of Gymnazists in their elementary school. The government system was entirely inspired by the Gymnasium State. The dissolution of the micronation is uncertain, but the 007 has not been active after few months since its foundation. Most of the information about the micronation is unknown outside its former citizens. Flag of the unnamed state as described

On 19 December 2019, two older students of the Sušice gymnasium interested in the idea of micronationalism met with few Gymnazists. During the conversation, the students expressed interest in establishment of a micronation, with a small territory just outside Sušice. The main policy of the nation, which name was never determined, was the legalization of marijuana as was also noticeable from the planned flag.