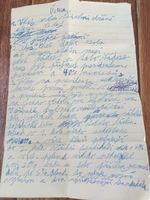 The Transitional Period is commonly said to begin on 18 November 2017, when the Socialist State of Gymnasium joined the Czech MicroWiki community, already under the name Unofficial State of Gymnasium. The Council of the Socialist State of Gymnasium began work on the Constitution, with Joel Novotný drafting the Provisional Constitution. However this Constitution later immedeately caused controversies when it was signed on 10 January 2018, as after its signatory, it was revealed that it contained Novotný's own ideas instead of ideas created by the Council. The Provisional Constitution had to be changed, however some Novotný's ideas were accidentally left out and finally removed in the constitutional change of February 2019. On 29 December 2017, the micronation joined the international MicroWiki community, dropping the word "Unofficial" from the name and introducing a new flag. The end date of the Transitional Period is considered to be 8 January 2018, when the first election took place.