From MicroWiki, the free micronational encyclopædia
(Redirected from Celebrations Day)
Jump to navigation Jump to search 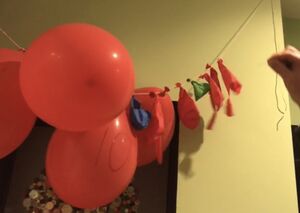 New Year's Eve celebrations in New Eiffel: a balloon is popped for every hour, counting down towards the New Year's Day (00:00).

None of New Eiffel's successor states—Republic of New Finland, Kingdom of New Finland—observed any fixed public holidays, although the residents of both micronations observed some of the holidays that were official in the United Kingdom. After the Principality of New Temporary (later New Eiffel) was established on 11 August 2018, founder Prince Zabëlle I began pondering ideas for holidays to be observed. A Calvinist, Zabëlle I chose to observe several Christian holidays, and also thought about observing frivolous holidays based on his personal philosophy that observing a large number of frivolous holidays would improve the mental well-being of citizens. On 5 December, New Eiffel adopted its first sixteen public holidays. Several more unofficial holidays were adopted between February 2019 to January 2020, with the adopting of further holidays becoming impossible due to the crisis in New Eiffel. New Eiffel dissolved on 1 November 2020.