From MicroWiki, the micronational encyclopædia
(Redirected from Princess Caroline)
Jump to navigation Jump to search

HIH Crown Princess Caroline is the daughter of the former Emperor Terry I and the younger sibling of the incumbent Emperor Jonathan I of the Empire of Austenasia. As such, she is heir presumptive to the Throne of Austenasia, and served as the former Third Midget Master between July 2006 and February 2010.

After claiming the Throne and losing the subsequent Austenasian Civil War, the Crown Princess was sentenced to a week of exile, which lasted from 7–14 August 2010. Crown Princess Caroline does not carry out many official imperial duties, though she often accompanies the Imperial Family to events or when visiting other members of the extended Family. She was elected Representative of Wrythe in December 2011, and held that office as well as several positions in the Cabinet until the November 2013 Austenasian elections.

Upon the ascension of Jonathan I to the Throne in January 2013, Caroline became heir presumptive, assuming the title of Crown Princess. She will be displaced from her position as heir by any future children of the Emperor.

Crown Princess Caroline was a member of the Midget Army, the inhabitants of a primary school-based micronation known as the Midget Empire, and on 31 July 2006 inherited the title of Midget Master from her brother, who was leaving the last year of the school. When she returned after the summer holidays, she was unwilling to rule and the Midget Empire fell.

It was six months after she had left the school herself, on 30 December 2009, that she finally issued a decree as Midget Master and founded the Midget Nation-in-Exile. On 4 February 2010, she decided to abdicate in favour of Thomas (a former commander in the Midget Empire) so that the new Nation-in-Exile would have a strong leader.

Caroline gained the title of Princess when the Empire of Austenasia was declared an independent state on 20 September 2008. As daughter of the first Emperor, Terry I, Princess Caroline was second in Line to the Throne.

Skirmish of the Treasury

Main article: Skirmish of the Treasury

On 25 May 2009, some friends of the then Princess were invited to the Imperial Residence after a celebration of her 11th birthday. She promptly led them in an attack on the Prime Minister's Office, defended by Crown Prince Jonathan and by Lord General William (who had also been invited). The attackers stole the Treasury, but the defenders were ultimately victorious (with the help of Emperor Terry), and Princess Caroline was arrested by her brother.

On 31 May, the Princess was held to trial by Parliament for her role in the Skirmish. Although found innocent of treason and two counts of high treason due to a lack of evidence, she was found guilty of armed robbery, conspiracy to commit assault, and attempted assault. The Princess was sentenced to several community services and a public apology. The now Emperor Jonathan I and Emperor Father Terry have long since forgiven Caroline for this incident, and although the Skirmish of the Treasury was the first time that the Austenasian Army fought in defence of the Empire, it is now mostly remembered simply as a time when the Princess and her friends got hyperactive at a party.

Claim to the Throne and Austenasian Civil War

On 15 February 2010, HIM Emperor Terry I announced that he would abdicate the Throne. Crown Prince Jonathan refused the Throne so that he could remain Prime Minister, and so it passed to Emperor Esmond III.

Emperor Esmond, despite not being related to the Imperial Family, had been made second in line to the Throne during October 2009 as a ceremonial honour with the passing of Act 105 (Supreme Companion of the Heir). At the time of this honour being granted, it was not expected that Emperor Terry would abdicate so soon, and that when he did Crown Prince Jonathan would refuse the Throne. Act 113 (Abdication of HIM Emperor Terry I), which enacted the transfer of the Throne, kept the Line of Succession the same as if Terry I were still Emperor. Princess Caroline and her brother thus retained their imperial rank.

On 3 March 2010, Princess Caroline announced that she was making a formal claim to the Throne, stating that although she would not try and overthrow him, she believed that the accession of Emperor Esmond III was unlawful and that she should have been next in line after her brother refused the Throne.

The Vestry Conference, held between the Crown Prince, Lord General William and Princess Caroline was held on Sunday 7 March to attempt to reach a compromise. The talks collapsed, and ended with the declaration of the Austenasian Civil War after the Princess was arrested for high treason due to stating that she would attempt to depose Esmond III.

Princess Caroline was placed under low-security house arrest in the Imperial Residence: she was allowed access to the internet and telephones, and could leave the house whenever permission was given by another Wrythe Town Council member for her to do so. Her supporters (the Carolinians) were defeated in two battles and the Austenasian Monarchical Referendum. On 24 May, the war ended with victory for the Emperor.

After losing the Referendum to the Emperor, Princess Caroline signed the Treaty of Ruskin Road on 23 May 2010, withdrawing her immediate claim to the Throne and denouncing all military support for it. By signing it, she also accepted her punishment of one week's exile for High Treason (announcing her intention to remove the Emperor from the Throne). The Treaty came into force on 24 May, when Esmond III (the final signatory) signed the Treaty.

On 3 June 2010, Princess Caroline issued a statement denouncing continued support for her renounced claim by some North American micronations. She spent her week in exile accompanied by some members of the Imperial Family in the British seaside town of Sidmouth in August later that year. 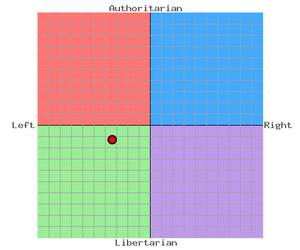 Crown Princess Caroline's position on the political compass as of December 2012.

Princess Caroline met Esmond III in person for the first time when he visited the Imperial Residence on 18 September 2010 for his coronation (they had previously spoken over the phone earlier in the year on 1 April, during the civil war). The friendly greetings exchanged between the two former enemies in front of members of the Imperial Family and the Emperor's Orlian retinue helped restore the Princess' standing in the Carshalton Nations. She became regarded as having rebelled due to a justifiable sense of having been seriously wronged, withdrawing her claim when realising the Austenasian people did not support it, and having served her punishment for causing the war. She was even honoured by the Emperor later that year, given the ceremonial Rushymian title Commander of the Lower Playground in November.

The Princess did not involve herself in politics again until December 2011, when she stood for election as Representative of Wrythe, winning the seat from her brother on Christmas Eve with 66% of the vote. Later that day, Declan I (Esmond's successor as Emperor) appointed her Chancellor, Chief Ambassador, and Secretary-General to the new Cabinet, but she is not regarded as having had particularly successful terms, doing little of note and relying mainly on her brother for direction.

On 20 January 2013, Declan I abdicated. Crown Prince Jonathan succeeded him as HIM Emperor Jonathan I, making Caroline the new Heir to the Throne with the title of Crown Princess. Caroline did not stand for the November 2013 Austenasian elections, and was succeeded in her governmental positions by her brother the Emperor. Upon her 16th birthday on 25 May the following year, she was made a member of the Privy Council, and was appointed one of the two Consuls for 2015 at the start of that year.

Crown Princess Caroline starred in Cool Barbie, ATP's flagship sci-fi series, voicing the titular character all fifteen of the modern episodes (as well as the latter two of the three original, pre-Austenasian films). She also appeared in-person as Moonita, a leader/protector of the toys' kingdoms, in Cool Barbie IV - The Uprising (2009), Cool Barbie VII - Secession (2012), and Cool Barbie VIII - Plan of the Scourge (2014), as well as Cool Barbie herself (after the character switched bodies with Moonita) in the Xeaphon minisode (2015), Cool Barbie IX - Last of the Mysterons (2015) and Cool Barbie X - War in the Sky (2016), and has voiced numerous minor characters.

Note: From 20 September 2008 to 14 February 2009 there was no established way of honoring members of the Imperial Famliy. As such, during this period Caroline's formal style grew extremely long as various titles and honours accumulated, but is here stated merely as "HIH Princess Caroline", as which she was commonly referred to during this time.

Titles and styles in Austenasia