From MicroWiki, the free micronational encyclopædia
(Redirected from Politics of St.Charlie)
Jump to navigation Jump to search 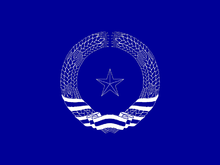 The Official Flag of the St.Charlian Government.

The politics of St.Charlie take place in a framework of a parliamentary federal republic and of a multi-party system. Executive power exercised collectively by the St.Charlian Government, composed by the Cabinet of Ministers, which led by the Prime Minister of the Federal Republic (Italian:Primo Ministro Federale), usually referred just as Prime Minister (Primo Ministro). Legislative power vested in the St.Charlian Parliament and, secondarily, in the Cabinet of Ministers. The judiciary was independent of both the executive and the legislative branches.

St.Charlie was a federal democratic republic since November 23 2008, when the monarchy was abolished by the November Revolution and the constitution was promulgated. St.Charlie remained a single-party republic until January 21 2009, when the Branson Act was ratified by the Cabinet of Ministers and the St.Charlian Parliament.

The 2008 Constitution of the Federal Republic of St.Charlie established a unicameral legislature, an executive branch (Cabinet of Ministers), headed by the Prime Minister of St.Charlie, and an independent judicial branch headed by the 'Department of Justice'. The Federal President is the head of state, though his position is separate from all branches.

As the head of state, the Federal President represented the unity of St.Charlie and has many of the duties previously given to the king of St.Charlie. The president serves as a point of connection between the three branches of power: he elected by the lawmakers, he appointed the executive, and was the president of the judiciary. The president was also the commander-in-chief of the St.Charlie Armed Forces.

The President of the Federal Republic was elected by an electoral college consisting of the St.Charlian Parliament for a three-year term. His election needed a wide majority that is progressively reduced from two-thirds to one-half plus one of the votes as the ballots progress.

Usually, the President tried to stay out of the political debate, and to be an institutional guarantee for all those involved in the political process. The president could also reject openly anti-constitutional laws by refusing to sign them, since he acts as the guardian of the Constitution of St.Charlie.

The St.Charlian people elected every first Sunday of the year the Prime Minister of the Federal Republic, which later appoints its Cabinet. The Prime Minister advises the President of the Federal Republic on the composition of the rest of the Cabinet of Ministers, which comprises the ministers in charge of the various governmental departments. In practice, the President accepts prime minister's advice, and submits the proposed Council for a vote of confidence from the St.Charlian Parliament.

The government had the power to issue decrees. Decrees have to be confirmed in the parliament.

The prime minister, through the cabinet, effectively runs the Government of St.Charlie. The current Prime Minister is Alexander Reinhardt, nominated by the Parliament after the Branson Act 2009, and previous Vice-Secretary of the NPSC. He was re-elected by the people of St.Charlie in 2010.

Composition of the St.Charlian Parliament. The IIIrd Legislature is the first one since 2008 in which the Socialist Party has gained a parliamentary supermajority.

Summary of the current composition of the St.Charlian Parliament

Several rivalry has followed in the first months, that was later calmed down with the ratification of the Aberystwyth Agreement that forces all political parties in power to nominate members of the Cabinet that are also part of the Opposition. The Socialist Movement under Fabiana Gallo della Loggia saw a relative political stability and improvement within the intermicronational sphere. It was widely regarded as one of the most successful socialist parties of the MicroWiki community; Gallo della Loggia herself was awarded an Order of Lenin and an Order of the Red Banner.

St.Charlie had five regions (known as Federations) and two provinces. The constitution of St.Charlie provided these five Federations extended powers. Only the Federation of District was divided in three provinces, known as boroughs.

Federations with a "present" number of citizens have their own local elections: each of them appoints a Federal President, which represents the region at the St.Charlian Parliament. While the concept of Federations exists since the birth of St.Charlie, the division of District into three boroughs occurred "only" in December 2009. On the other hand, District was a state in its own right (being the Capital city).