The St.Charlie Armed Forces was comprised of the Army (Esercito St.Charliano), Navy (Marina St.Charliana), Border Troops (Forze di Confine) and other sub-units such as the Ministry of War Information (Ministero per le Informazioni Belliche), being more specifically a sub-branch of the Army. The three main SCAF branches were under the command of the Ministry of Defence.

Excluding the Italian Army, the St.Charlian military was the most developed armed force of Central Italy.

The St.Charlie Armed Forces was created after the November Revolution by Alexander Reinhardt, and later developed by Whisky I.
Initially, Reinhardt formed the Army and the Border Troops. Later, after his resignation, Whisky I added the Air Force and the Navy. The Navy was formally created for resolving the issues due to the heavy rain which happened in Central Italy during the first days of December, later, it was kept for protecting the lake, located in Lower-St.Charlie.

With the Branson Act 2009, the Air Force was suspended as it wasn't used by any of the SCAF personnel, nor the St.Charlian Government.

The last Chief of Staff of the St.Charlie Armed Forces was Admiral General Leonard Von Sternberg, who was nominated on the 31st of August 2009, and who succeded Colonel Alessio Giovanrosa.

Branches of the SCAF

Since its creation, the Armed Forces of St.Charlie were divided in different branches, or sub-departments. Each department is held by a Commander which is responsible for its organisation.

The Uniforms of the Army serve to distinguish soldiers from members of other services, but were used during the Sanfo era as the standard uniform for all the Armed Forces. The two primary uniforms are the utilitarian camouflage uniform and the garrison and dress service uniform.

The Combat Uniform, or camouflage,was the utility uniform worn in garrison and in combat zones by the St.Charlian Army. The uniform features a camouflage pattern, which was designed for use in woodland and desert environments. The design made for the jacket uses hook-and-loop-backed attachments to secure items such as name tapes, rank insignia, and shoulder patches and tabs, as well as recognition devices such as the St.Charlian flag patch. Unit patches, if existing, are worn on the left shoulder, while the St.Charlian flag is worn on the right. Only pin-on identifying badges and shoulder tabs are authorized for wear.

The Service Uniform was the standard garrison uniform worn in other occasions than combat or utility work. The standard dress includes the army khaki-beige coat and dark blue trousers or skirt, for female members, a short or long sleeve white shirt and four-in-hand necktie. The jacket must include rank, insignia and name tag. The St.Charlian flag patch was worn on the right shoulder. Members require also the typical "maroon beret", that must be worn for both garrison duty and non-ceremonial functions.

Department of the Navy

The emblem of the St.Charlian Navy

The St.Charlian Navy is the sea branch of the St.Charlie Armed Forces. It was one of the three uniformed services of St.Charlie. It traced its origins to the establishment of the SCAF, in November 2008.

Weather conditions in District and other parts of St.Charlie during 2009 spurred the St.Charlian Parliament to keep the Navy operative and give it a considerable priority in case of adverse weather. As a consequence it can rapidly respond to crises, making it an active player in the St.Charlian environmental policy.

The St.Charlian Navy had two categories of dress uniforms: winter, and summer dress.

The winter uniform was the "traditional" and oldest navy uniform of the Navy. It was re-designed however during the Von Sternberg era together with the summer uniform.

The winter uniform was used from September to January. Two different materials are used: the poly/wool blend and Certified Navy Twill (100% polyester, not authorized however for shipboard use due to low fire resistance). The Navy Officers Blue Service Uniform (or NOBSU) could be worn by "Ensigns" and over. Ranks below "Ensign" normally wear the Navy Troops Blue Service Uniform (NTBSU), as they don't had shoulder boards and no stripes on the sleeves. Instead, they used rank patches on both arms. Both servicemen have to wear a black/dark blue tie and a white shirt. Ribbons must be worn on the left, name tag on the right, and collar tabs.

The Navy Officer/Troop Blue Service Uniform Shirt (NOBSU/NTBSU) was made of Navy twill. Both uniforms are white, with the difference that officers use shoulder boards and troops have rank patches on their arms. The shirt doesn't needed a tie, and was generally worn with a white t-shirt.

As of the shirts, officers and troops weared the Navy Officer/Troop Khaki Service Uniform Shirt (NOKSU or NTKSU), which was the same as the winter one, except for the khaki colors and the collar tabs.

The Border Troops were a branch of the armed forces responsible for immigration and border law enforcement, using generally the mobility of the St.Charlie Federal Police. In the civilian leadership structure, the Troops worked closely with the St.Charlian Office of Immigration, until the latter was merged into the military. The Border Troops were lead by Major General Roberto Sanchez.

The Border Troops are the only corps that never participated unofficially in the November Revolution. It was the smallest of St.Charlie's armed forces in the Department of Defense.

The Border Troops used the service uniform for the whole year, contrary, for instance, to the Army. They also don't recognize a working uniform, although servicemen stationed at borders may use camouflage wear if found necessary.

The standard service uniform comprises an open-necked grey tunic (with or without an attached leather belt, depending on the rank) and dark grey trousers, worn with a white shirt and black tie. Although nothing forbids servicemen of wearing khaki dresses, like in the Army, these have been less used since Summer 2009, when Von Sternberg was nominated in charge, and most now wear grey. Warrant officers and ratings have always worn a leather belt, often with technical equipment such as a baton, notebook and BB gun. In some federations, female officers do not wear a tie. Rank badges are worn on the epaulettes of their jackets. The dress was worn with black, polished shoes or boots. Both troops and officers wear the peaked hat with this dress, or the Army "maroon beret", although design differs depending on rank, and headgear is not obligatory. 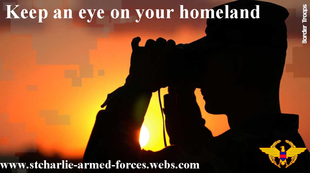 A recruiting poster of 2010. Several posters were also produced in 2009

In the past months the St.Charlian military has been running a recruiting service with the intention to raise the current organic. While however since June the Armed Forced had a wide support mainly due to Alexander Reinhardt's Year 11 Personal Project period, after this period, the SCAF has suffered a decline in the organic (mainly also after the resignment of General Karifa Sanfo that had many supporters in the reserve personnel).

However, like all other nations, to become part of the SCAF, the applicant must be a St.Charlian citizen, and must had good knowledge of at least one of the two official languages of St.Charlie (English and Italian). Another prerequisite was to be knowledgeable about general St.Charlian history.

In St.Charlie, recruit was generally followed by training in the federal Military Academy, located in Caroline Charlotte. Generally micronational armed forces do not present a badge or other award to denote completion of recruit training. The St.Charlie Armed Forces typically issued a certificate and the Caroline Charlotte Graduation Ribbon (issued after completion of the individual training) which was worn on the uniform. The academy was formed by Leonard Von Sternberg and also allows non-St.Charlian citizens to participate.

Cadets can attend for both theoretical and practical exam (which involves the use of videogames) or just do the theoretical one. Academy graduates that later join the SCAF are generally admitted with an officer rank, depending on their result in the exams.