From MicroWiki, the free micronational encyclopædia
(Redirected from The Count Oliver's, Casino & Lounge)
Jump to navigation Jump to search

District, or the Federation of District (Italian: Federazione di District) was the capital city and one of the federations of the Federal Republic of St.Charlie. With a population of more than 50 people, it was St.Charlie's second most populous region. Geographically embedded in Southern Europe, the territory of District was influenced by a mediterranean climate. Around two thirds of the city's territory was composed of parks and gardens.

From its foundation as capital of the Kingdom of St.Charlie in 2000 until its disestablishment, District has been a major center of culture, politics and entertainment, serving as a hub for internal and foreign affairs, hosting the Federation of District Conference Center and other places of interest including the "Count Oliver's, Casino & Lounge", the District Sport's Center and, most importantly, the Presidential Palace with its gardens. The urban and historical legacy has made it a setting for national film productions. The city was recognized in St.Charlie for its architecture, arts and a high quality of living.

On September 25, 2011, it was announced by the St.Charlian Observer, that the land District sits on was to be sold to a Russian family and that a new capital for St. Charlie would have been chosen.[1] The territory was eventually removed from the St.Charlian claims two months later, on November 25. Much of its population moved to the new Federation of New Branson.

District saw its first micronational period in December 2000, when the Kingdom of St.Charlie made it its capital and only territorial claim. The region remained part of the Kingdom until 2008 when the November Revolution overthrew the monarchy in favor of a liberal democracy. District's jurisdiction was transferred to the newborn Federal Republic through the new Constitution, which made it its capital city on November 23. 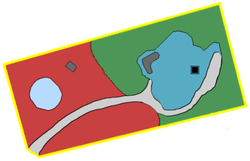 At the time of its disestablishment, District was the 4th largest St.Charlian region, but the most important in matter of history and contents. Having been from 2000 to 2008 the Capital City of the Kingdom of St.Charlie, the territory hosted the former Royal Palace, which then became the "Presidential" Palace, and other buildings built during the monarchy. The federation was also the only populated region of the "Italian St.Charlie" until May 11, 2009, when Cascia del Pinzanello became a region with its 5 citizens, who however left the federation only months later.

District enjoyed a Mediterranean climate, typical of the Mediterranean coasts of Italy, where spring and autumn are mild to warm, and the first weeks of autumn are known as being sunny and warm. By August, the maximum diurnal temperature often exceeded 30 °C (86 °F). The average high temperature in January was about 12.9 °C (55.2 °F), but in hot periods it could be easily higher, while subzero lows were not uncommon. Snowfalls were generally very rare, and District usually suffered of hailstorms throughout January–February. Within the last ten years those have been rare in District: the most recent snowfall with accumulation was in February 2010, the first since the birth of the Kingdom.

Generally – summer's season in the territory lasts about 6 months, from May to October. Two months (April and November) are transitional, sometimes there are temperature above 20 °C (68 °F). December, January, February and March is the coldest months, with average temperatures (of these four months) over 13.1 °C (55.6 °F) during the day and 3.7 °C (38.7 °F) at night. Average relative humidity is 74.8%, from 72% in July to 77% in November and December.

District was divided into three administrative divisions (or Distretti). In the beginning, those were recognised as semi-autonomous federations, until the administrative reform of December 14, 2009, which united all the three federations under one single banner.

Due to the fact that administrative divisions in District, except for Branson, were uninhabited, government bodies were absent, making every district under the jurisdiction of the President and Mayor of District, Barbara Ruvolo.

The logo of the Count Oliver's

Branson was the central locality of District. Until December 2009 it was the original, main territory of the federation, and was known as "Downtown District" until June 2010. Branson was the actual capital of St.Charlie.

During the post-Revolutionary period, Branson was the seat of all Government buildings. Later, it was only regarded as the official residence of the President of the Federal Republic and the President of District, which were also the main tourist attractions of the city. Due to these reasons, Branson was considered the heart, and the downtown of District.

Together with the Presidential Palace, Branson hosted other places of interest, often used by visitors when visiting the capital city. Probably the most notable one was the Count Oliver's Casino & Lounge, also known just as Count Oliver's, a land-based casino located on Square Gabriel Fauré, owned and operated by the State. The grand opening was held on August 17, 2009.

The property offered a 20 m² area along with a bar and relaxing area. The site's architectural theme was reminiscent of the Art Deco and Contemporary style of the 60s, and was also the first casino to open in St.Charlie after the Gambling law of August 2, 2009. Even as of today, it remains the only St.Charlian casino known to the public.

The name of the casino was inspired by the Italian Alan Ford comic character Sir Oliver, known in Italian with the name of Conte Oliver, a strapped English nobleman who left his homeland in disgrace after being sought by the police for various large scale theft offences. There are various rumours that say that this character was used as the name of the casino as a way to mock Camurian monarch Ian II.

Another meeting point for visitors and citizens was the District Conference Center (Italian:Centro Congressi di District), formally known as the "Federation of District Conference Center" (or Centro Congressi della Federazione di District). It was the primary convention and exhibition centre of the Federal Republic, serving as venue for state and unofficial meetings, namely the conventions of the National Party of St.Charlie.

The convention center was opened on July 20, 2009,and offered one conference room and an Official online chatroom, on Geesee, until the website was closed.

The flag of Owl Creek

Owl Creek (Italian: Ruscello del Gufo) was the northern section of District. Until December 2009, it was known as the semi-autonomous federation of Upper St.Charlie or St.Charlie Superiore.

The division was formed on November 23, when the Constitution recognized it as a region of the newborn Federal Republic. Since the very beginning and until its return to Italy, the region had no regular living citizens on its territory, though it was full of various plants and trees, and animal species, especially birds, such as the owl, which appeared on its flag.

Lakefort (Italian: Lago Forte) is the southern section of the Capital. Until the decree of December 14, 2009, the district was known as the semi-autonomous Federation of Lower St.Charlie.

At the time, it has been from the 23rd of November until the 11th of May, the largest territory of the Federal Republic. It was succeded by Cascia del Pinzanello. The Federation is the home of the Department of Defense and of the Lake, making it the only Italian territory where the St.Charlian Navy is actively used.

The flag of District had a pigment blue field on which a large yellow rhombus is centered. A shiny blue star, also appearing on the national flag, is placed within the rhombus. It was the symbol of the November Revolution.