The region of White Mountain is a current holding of the Republic of Kozuc, located near the Bakaria District. Formerly a Territory within the St.Charlian Commonwealth, White Mountain has had a long history within the micronational community as both a location for war/military exercises, and economic advancement. Like all Territories in St.Charlie, it had no population, and still does not today. When it was a part of Commonwealth, Kozuc was a Federation of St.Charlie, and continued to administrate its land for the time they were both in the Federal Republic. At the time, it was the only territory of St.Charlie to border another micronation, the nations of Skendal and Frexico.

Soon after Kozuc left the Federal Republic, White Mountain was seeded back to them. Finally, the former Republic of Kozuc was disestablished in 2014, and while White Mountain remained in the control of other micronations for quite some time, their sovereignty over it never was recognized. Now, White Mountain is claimed as the only holding outside of the Districts within the Republic of Kozuc and continues to be the location of their largest military base, Fort Baker. By law, White Mountain is considered to be a "Territory" because of its lack of population. As Joint Commander, Colonel Kyle Bryan is the current head of all territorial affairs for the Kozuc government. 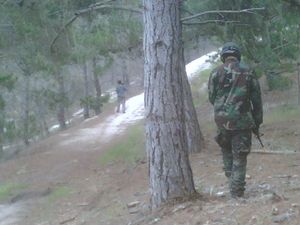 White Mountain has always had a large military presence for not only Kozuc, but many other micronational or psuedo-micronational entities. The Kozuc National Armed Services, the People's Republic of Skendal (formerly known as "West Kozuc), and Frexico have all laid claim over much of the region. Agreed upon Territorial lines did not truly exist, and with Kozuc as the only micronation still active in the region, not many conflicts have happened since early 2014. Fort Baker is the largest military installment for Kozuc, and it is located just north of the former "DMZ", where military operations and training are still held for their armed forces. Reported border skirmishes have been taking place in the region for over two years about which micronational entity controls White Mountain, and since many socialists have left to rejoin the Kozuc Revolutionary Armed Forces, the security protocols have been heightened.

Kozuc's agricultural industry is still today based in the White Mountain region. For the entire Republic, most funding and economic stimulus comes from the region, so it is imperative that they keep it secure. Currently, Kozuc is the only micronation to lay claim to White Mountain since early 2014, but many other airsoft groups attempt to use the land without permission. Although technically public access property, the Kozuc National Armed Services do not allow others in certain areas of the mountain for security purposes.

Most of the administration of the territory is done so by the Commission of the Armed Services, and their representative to the territories, Joint Commander Colonel Kyle Bryan. The Kozuc National Armed Services are stationed in White Mountain to protect the economic importance of the region and to retain its strategic value. Bakaria, as the closest District, is responsible for immediate protection of all lands and holdings in White Mountain,

Fort Baker is a military installment, named after its Commander and the Commissioner of Bakaria, Director Caleb Baker, which can be found on the border between White Mountain and the Bakaria District. The Fort is the location of the Armed Services Training Center, the Clandestine Services Headquarter and some other Armed Services administration offices. Anderson Arms, the military development and contracting company, has been granted permission to use the Fort for training, planning and analysis.