Magnus De Armis (Florence, 4 October 1990 - ) is a politician and retired SCAF Captain. He is currently the opposition leader of the St.Charlian Parliament and Secretary-General of the St.Charlian Socialist Party. He is also a former St.Charlian Observer Director and continues to contribute to the newspaper as a columnist under new Director Nick Maggiore. In the micronational community, he is most known for his central part in the "Observergate" scandal.

Introduced to micronationalism by Alexander Reinhardt in early 2009, he initially applied for service in the St.Charlie Armed Forces and was placed under the SCMP (St.Charlian Military Police). On June 2, 2009 he became Chief Co-ordinator of the Internal Security operations Division, a specialist branch of the St.Charlian Police Department. In the months that followed, De Armis personally lead a series of successful operations, in particular those involving the closing down of unconstitutional organizations by destroying them at the root. Because of his work, De Armis was promoted to the rank of Captain.

In August 2009, it seemed as if De Armis would pass to the MIB, the St.Charlian Secret Services, and replace Leonard Von Sternberg as Director, after the latter was appointed SCAF Chief of Staff. In the end, however, De Armis preferred to terminate his military career, officially on August 29, and join politics in the St.Charlian Socialist Movement.

Soon after joining the party, on August 30 2009, Fabiana Gallo della Loggia nominated De Armis to the position of first Vice-Secretary General of the St.Charlian Socialist Movement. For the next few months, De Armis played an active yet marginal role in the party's politics and in those of St.Charlie in general. In December 2009, however, De Armis proposed an ideal solution to the problem that the cabinet re-shuffle planned for January 2010 would cause. Through the "De Armis Semplification Act", the President of the Ambassadorial Council would become the Foreign Affairs Minister, while the SCAF Chief of Staff would become the Minister of Defense.

Following the defeat of the SCSM at the St.Charlian General Elections of 2010 and the resignation of Gallo della Loggia, on January 4, 2010, De Armis was nominated General Secretary of the party, thus making him the Leader of the Opposition to the Second Reinhardt Administration. In his new position, he was immediately more active and started a serious process of party reform in order for it to recover from the electoral defeat. After changing the party's name to "St.Charlian Socialist Party", he nominated Nicolò Alvisi as his Vice-Secretary and published the Statute of the Socialist Party.

On January 24, 2010, De Armis was voted with a 4 to 3 majority as President of the St.Charlian Parliament. In the following months, he worked extensively in moderating all parliamentary discussions and by contributing to all major bills passed by Parliament. In particular, he co-proposed with Alvisi the "Lingual Bi-Polarism Bill", which was positively voted on May 2. It regulates the usage of the two official languages of the Republic, English and Italian, and created the "St.Charlian Federal Association of Translators", who are to be tasked with the translation from Italian to English of all laws passed by the Parliament. 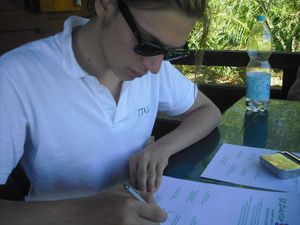 De Armis was one of the key visitors of the District St.Charlie Expo 2010, alongside Heinrich Schneider and Alexander Reinhardt. He cooperated extensively to all of the proposals that were discussed at the Expo and was essential in the hammering out of common policy details for the next legislature.

In particular, De Armis was greatly influential in the structuring of the "Educational Reform" and is set to take on the placing of Senior Lecturer in Micronational Politics as well as the placing of Rettore, or principal, of the Tor Pendente State University. Surprisingly, De Armis was also favourable to the plans of a stock market and the privatization of SOEs, remarking that ideology should be left aside when the interest of the nation is at stake.

De Armis first attracted international attention and controversy when he agreed to publish a letter from at-the-time fictional Erusian legislator Carl Pierson in the St.Charlian Observer, in which Pierson claimed that the Democratic People's Republic of Erusia was an authoritarian dictatorship that was democratic in name only. De Armis personally wrote the preamble to the letter, which was also deeply critical of Erusia and its political system, despite a long-standing (and now ambigous) friendship between the Erusian National Communist Party and the St.Charlian Socialist Party.

The article was published one day after supposed wide-spread anti-government protests and De Armis was accused of played a role in the protests, which were deemed counter-revolutionary, and thus issued an arrest warrant. Observergate ultimately lead to the total collapse of diplomatic relations between the DPRE and the FRSC. Following recent events, it has become clear that the DPRE was exactly as portrayed in the article and that Robert Lethler was behind the whole scandal. Indeed, there is compelling evidence that "Observergate" was nothing but a deliberate plot to discredit De Armis, the SCSP and St.Charlie itself. 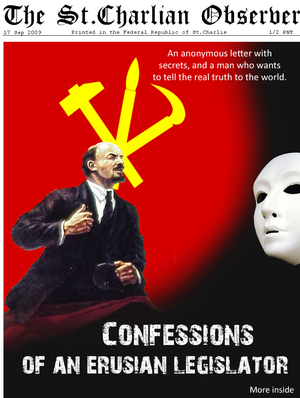 The cover of the Observergate article

The article and the decision to publish it prompted an outrage within Erusia and attracted widespread criticism from the international community. Several prominent micronations and their leaders supported the Central People's Government of Erusia, believing that the decision to publish the article was politically unsound and that De Armis should have been more responsible, though most criticism was levied against Alexander Reinhardt's role in publishing the paper. In particular however, De Armis was heavily criticised for the tone of his article - which many felt went against the supposed neutrality of the Observer due to its heavy anti-ENCP bias. Several individuals expressed the view that he violated a fundamental tenet of independent journalism by failing to consult with Erusian authorities before writing the story; not so much to seek their permission, as much to give them a chance to defend their position alongside the article.

Futher criticism was levied against De Armis and the Observer for the design of the newspaper edition the article appeared in. The cover page depicted Vladimir Lenin against the flag of the Korean Workers' Party, the ruling party in the Democratic People's Republic of Korea. Furthermore, the article depicted the character V from the popular movie V for Vendetta. The ENCP, or rather, Robert Lethler, were supposedly offended by the two parallels with Erusia.

In spite of the extreme criticism lobbied against him by some individuals, De Armis also won a great deal of popular support for the article. Though many disagreed with its contents, most who did so still agreed that he had the inviolable right to publish the article. In particular, fellow journalists and micronational Human Rights campaigners were vocal in their support for his right to publish the letter and article, publicly defending him and protesting the decision of the government to censor the newspaper under Erusian pressure. Support within St.Charlie was also wide-spread, and he was defended by both Alexander Reinhardt and Fabiana Gallo della Loggia, though neither offered their endorsement for the content of the article.

Magnus De Armis also won some support for his decision to stand up to Robert Lethler, General Secretary of the ENCP, even though he had little to no diplomatic experience. In certain private circles, it has been reported that the controversy significantly reduced support for Lethler in the GUM election, giving him a lower majority than analysts had been anticipating. In particular, at least one prominent supporter of his campaign later voted for his opponent Jacob Tierney. Additionally, many praised Magnus for the quality of his reporting from a literal perspective, even if they did not agree with the quality of journalism.

In real life, De Armis attended an artistic high school in Florence for five years, and once graduated, he enrolled at the University of Florence in September 2009. After one year of studying "Ancient Letters" (Latin and Ancient Greek), he has decided to re-enroll for the next academic year to study Political Science.

Politically speaking, De Armis is also very active in left-wing politics in Italy. He has recently been elected coordinator of the "Florence Communist Youth" of the Communist Refoundation Party. He follows various projects such as a regional party newspaper and radio and a "social market", where workers can buy low-price goods.