The Aberystwyth Agreement was a political agreement signed by Alexander Reinhardt and Fabiana Gallo della Loggia on 24 May 2009 in Aberystwyth, Wales. They signed on behalf of the Reinhardt Administration (or the Government) and the Opposition. 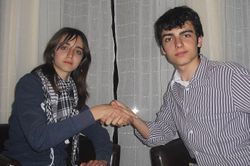 The families of both politicians happen to be in good relationships, so, when the Reinhardts decided to visit Nothern England and Wales for the bank Holiday weekend, they were followed by the Gallo della Loggias. Both St.Charlian leaders followed their parents, and so happened to be together for the whole weekend. During a visit to Bath before travelling to Wales on 23 May 2009, Reinhardt proposed an agreement with the Socialist leader, with the intention to make relations between Government and Opposition stronger. On 24 May, after arriving to Aberystwyth, a small town on the Welsh coast, they both agreed to sign the Aberystwyth Agreement (or Accordo di Aberystwyth, although the title on the top says Trattato, Treaty).

The treaty was poorly drafted on an A4 piece of paper because a computer was inaccessible at the moment. Nevertheless, it is the only document with the signatures of both political leaders.

The treaty's intention is to from a stronger alliance between the ruling Party and the opposition Party of St.Charlie (presently, the NPSC and the SCSM). What the treaty orders to both leaders is that, in case one of them wins the elections, it has to nominate a member of the Government that is part of the opposition party.

At the moment, there are several Socialist Ministers in the Reinhardt Administration: Fabiana Gallo della Loggia and Nicolò Alvisi are an example. Before the signing of the agreement, Daven Savoie and Suzy Rebisz were known to be SCSM politicians.