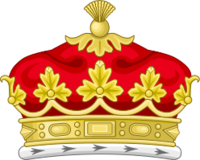 Coronet of a Florenian Duke

Dukedoms are peerages held by Dukes if male, and Duchesses if female. If the holder of the ducal title does not hold the style of royal highness, then the peer or peeress and their consort are styled His or Her Grace. Five dukedoms have been created for individuals within Florenia, and three of these people are royal highnesses. Only one Duke is not blood related to the Royal Family; the Duke of Fortchester, though he is a close friend of the Royal Family. The dukedoms and their peers are, in order of precedence: 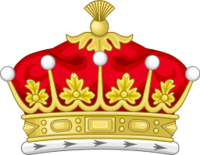 Coronet of a Florenian Earl

Earldoms are the peerages held by Earls if male, and Countesses if female. Earldoms can either be associated with a place (eg. Earl of Afula) or with a surname (eg. Earl Fialko). Earls and Countesses are permitted to use the style of The Most Honorable. There is currently only one earldom in Florenia, which is the earldom created for Lord John, father-in-law of Eran of Florenia. It was inherited by Lord John's son Lord Daniel. 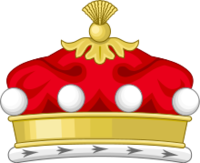 Coronet of a Florenian Baron

Baronies are the peerages held by Barons if male, and Baronesses if female. Like earldoms, baronies can either be associated with a place (eg. Baroness of Plymouth) or with a surname (eg. Baron Fialko). Barons and Baronesses are permitted to use the style of the Right Honorable. There is currently only one barony in Florenia, and it is held by the Minister of Education The Lady Deborah.