The prime minister of Florenia is the head of government of the Kingdom of Florenia. The post is not formally established or described in any current Florenian legislation but is instead a constitutional convention held by an individual who exercises de facto control over the government and its membership by maintaining the confidence of parliament, the sovereign, and the Council of State. Held by the individual upon whose advice the monarch effectively relies, the post has been perennially occupied by Nathan Afula, Florenia's founder.

Under Florenia's previous political system, the prime minister had been a statutorily recognized office with specifically enumerated powers and duties, directly elected by the Florenian public from 2011 until 2016 and thereafter appointed by the monarch until the implementation of the Resolution system on 26 April 2021. The Resolution system aimed to curb the previous near-absolute power of the prime minister by sharing executive power among a council and granting parliament supreme authority to remove government ministers and overturn all of their decisions. These reforms allowed the post to reemerge with the effective requirement of a democratic mandate. The prime minister's advice to the monarch is preeminent over those of the other councilors of state, and the prime minister largely sets the government's agenda and selects the council's composition. 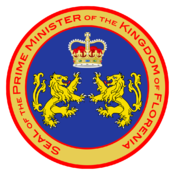 Florenia's 2011 Constitution established the office of prime minister as the chief executive in what resembled a semi-presidential system; the prime minister was directly elected, was not responsible to parliament or the monarch, and was given statutory authority to largely direct the affairs of the Florenian state. The post's recognized powers and responsibilities included:

For all of Florenia's history, Nathan has been most active member of the government by far, utilizing the office of prime minister to govern almost entirely unilaterally. Cabinet never formally met as a collective body during Florenia's first decade, with government ministers undertaking few to no official functions. This arrangement persisted without any significant opposition, constituting tacit approval of Nathan's government.

With Eran's issuing of the first four Orders in Council at 6:04 PM on 26 April 2021, the official post of prime minister, along with Florenia's previous political system, is considered to have ceased to exist. Nathan is still recognized to be the de facto head of government, as it is his advice which controls the sovereign's execution of the prerogative powers and guides the Council's political agenda and composition. The Resolution system grants supreme authority to a direct democratic parliament, thereby requiring any emergent political leaders, including a prime minister, to maintain its support. The post can therefore be described both as reminiscent of its Westminster-style counterparts and as a pseudo-prime ministerial system with significant checks.

Though the Lord President of the Council chairs the Council of State and is statutorily referred to as the among “the Crown’s principal officers and advisors,” they are not explicitly granted any outsize power over the executive government at large. The wider position of head of government truly lies with the prime minister, who does not necessarily lead the Council.