His Majesty's Navy, or simply the Royal Navy, is the marine combat and defense uniformed service of the Kingdom of Florenia. The Royal Navy has the responsibility of all aquatic patrol and defense of Floren Pond's 17 acres of water and nearly three-quarters of a mile of shoreline. The Royal Navy works along side the Florenian Royal Army, which is its land based counterpart.

The Royal Navy was founded on 1 January 2012 following the passage of an Act of Parliament. Currently, there are no enlisted or officer service members specific to the Navy, and individuals in service of the Royal Army are designated with its management. As official Commander-in-Chief, Eran is the highest ranking member of the Florenian Armed Forces, and The Prince Henry serves as Minister of Defense, and as such is in charge of the management of the armed forces. 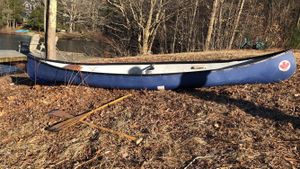 The Royal Navy is in command of two vessels, a canoe and a kayak, both owned by the Monarch and both yet to be named (at the moment, the prefix HMS is followed by the class of vessel, and they are therefore known as HMS Canoe and HMS Kayak at present). The canoe, manufactured by Great Canadian, has two seats, a bow seat for a navigator and a stern seat for a helmsman. Generally, the stern seat is occupied by the commander of the vessel and the bow seat by a lower ranking sailor. Both seated individuals are meant to propel the ship with paddles operated manually. The vessel can also carry one extra individual who can be seated on the floor of the middle of the vessel between its two thwarts. This individual may also contribute to the vessels propulsion. Cargo may also be carried towards the center of the boat.

After announcing that the Navy would consider acquiring a kayak, a ten foot Pelican Pathfinder 100x with a single man cockpit was purchased by the Crown to be used by the Royal Navy. The vessel is propelled manually by its operator by using a double headed paddle. Towards the aft of the vessel, a fastened lid can be opened revealing a small cargo hold. After the success of its scheduled maiden voyage and subsequent trial mission later in the day, the kayak was scheduled for regular and frequent use.

The Royal Navy has never considered acquiring boats with motor propulsion, due to the fact that Floren Pond is far to small and shallow to support such vessels.

The Royal Navy currently has no enlisted individuals or officers in its service.

Officers the commanders of the Royal Navy and are commissioned by the Monarch. Lower and middle ranking officers are tasked with command of individual vessels and individuals, whereas the Admiral staff is placed in charge of fleets, task groups, and Joint Forces Commands.

At any given time, only one individual can hold the rank of Admiral of the Fleet with a pay grade of OF-10. The Admiral of the Fleet serves as the professional administrator of the Royal Navy and as its principle military commander. The Monarch may appoint an individual to serve as Lord High Admiral, a largely honorific title given as a mark of favor. Currently, Eran holds the title himself.

Enlisted ranks are the lower members of the Navy. Enlisted individuals are tasked with the general upkeep of the Royal Navy, and posses the skill to be placed into combat. They are placed under the command of commissioned officers, and are generally regarded as the main manpower of the Navy.