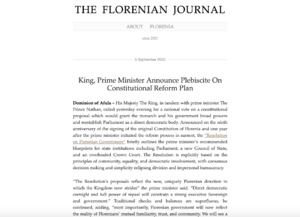 Front page of The Florenian Journal announcing the Resolution.

The Resolution on Florenian Government is a constitutional reform proposal authored and announced by The Prince Nathan as Prime Minister of Florenia on 5 September 2020 which broadly outlines the future direction of the Kingdom of Florenia. The Resolution calls for a strong monarch who would delegate executive power to a new Council of State, a direct democratic Parliament, as well as for the recognition of the Florenian principles of community, equality, and democratic involvement and consensus decision-making at all levels of government. The Resolution is the first stage in the formal reform process initially ordered by the November Declaration and later confirmed on 5 September 2019.

Released in tandem with a number of draft royal decrees, the Resolution was initially to be voted on in a national referendum by Florenia's citizens between 10 and 13 September 2020. However, the government ultimately scheduled the Resolution referendum to occur between 17 and 19 April 2021, announced as the first phase of the Resolution Plan. On April 20, the government announced that the resolution had been adopted by a solid majority and would become one of Florenia's central constitutional documents.

On 25 November 2016, Eran issued the November Declaration, suspending Parliament, claiming extensive governing powers, and instructing the prime minister to begin planning for major institutional reform. The Prince Nathan governed on behalf of the Crown as head of government, initiating the reform process in earnest on 5 September 2019, the eighth anniversary of the original Constitution. On 31 December he released a plan for piecemeal reform, indicating that the process would have a less formal and more flexible character. On 5 September 2020, following months of deliberation, the King reviewed and approved the prime minister's plan and the Resolution was released alongside multiple supplemental draft decrees which would be implemented if the Resolution is adopted.

The Resolution is comprised of six clauses. The first establishes the national principles of "community, equality, and democratic involvement" and declares that these principles ought to be reflected in Florenia's governing structures. The second addresses the power of the Crown, stipulating a strong monarchy and the creation of a Council of State to administer the government, advise the monarch, and exercise certain of the Crown's prerogative powers. The third reestablishes Parliament as a direct democratic national legislature comprised of all willing citizens over the age of 16. The fourth provides an outline for a new legal system, with a reformed Crown Court mediating disputes between citizens and the law seeking to avoid creating restrictions to be violated. The fifth proclaims an official affinity for consensus decision making in all Florenian institutions and recognizes the "close, familial bonds within the Florenian community." The sixth and last clause stipulates that citizens will vote on the Resolution in a national referendum between 10 and 13 September.

The text of the Resolution was left intentionally vague so as to provide legitimacy to the principles and direction of the Florenian project rather than solely on one specific constitutional arrangement. The Resolution instead points to a basic framework, and the draft decrees that supplement it, as well as the advocacy of the Prince Nathan, provide a more robust picture of Florenia's future.