The Princes Islands are a group of islands within Floren Pond, the large body of water which comprises a majority of the territory of both the entire Kingdom of Florenia and its capital, the Dominion of Afula. There are three major islands within the pond, each named after one of the three sons of Eran of Florenia.

Nathan Island, named for The Prince Nathan, is the smallest of the three islands, and the only one that is easily navigable. It has a small plaque commemorating the lives of Carl and Nelly Floren, past owners of the property on which Florenia is now situated and the couple who created the pond by rerouting a small river. It is approximately 280 sq ft (26 m2) in area.

Izzy Island, named for the nickname of Lady Isabella, Duchess of Fishrock, is the smallest mass regarded as an island within Floren Pond, and is generally considered part of Prince Nathan Island, as they are connected to each other by tree roots. It was previously named Norton Island, after Emperor Norton. 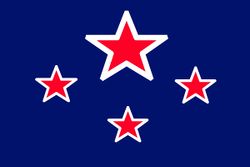 The three smaller stars on the flag of Afula represent the Princes Islands.

Henry Island, named for The Prince Henry, is the largest of the three islands, and is only observable from the water; it cannot be walked on. It is overgrown with bushes and small trees and its shores are largely made up of sizable rocks. It is physically separated from the other islands, and is situated to their southeast. It is approximately 1,500 sq ft (140 m2) in area.

Zachary Island, named for The Prince Zachary, is the second largest island and has very similar terrain to Henry Island. It lies north of Nathan Island, and is overgrown with large rocks along its shore. It is approximately 640 sq ft (59 m2) in area.

The narrow channel that separates Nathan and Zachary Islands is very shallow and very rocky, with rocks both totally submerged and hidden and protruding from the surface. It is very difficult for boats to navigate these shallow waters, and they are almost always avoided by the Florenian Royal Navy. Therefore, vessels always dock on the south/southwest shore of Nathan Island, where it is also easy to affix a line to tree roots and disembark.