Orders, decorations, and medals of Vishwamitra

The orders, decorations, and medals of Vishwamitra comprise a complex system in which Vishwamitrans and qualified foreigners are honoured for deeds that benefit the country or the community at large. This system takes considerable inspiration from the honor systems of the Malaysia, Japan, Thailand, and the United Kingdom, and came into its modern form following Vishwamitra's transition into a monarchy in 2020. The initial structure was introduced in 2015, and was at that time based upon the Indian honours system; this precursor saw continuous use until the dissolution of the republic. Kamrupa was the first state to institute its own honours (on 18 June 2020), an act soon followed by Vishwamitra's other provinces and territories.

The current system consists of three types of awards: honours, decorations and medals.

The monarch is regarded as the fount of all honours. Accordingly, the monarch is the only person who may create new national honours, serve as the Sovereign of all of Vishwamitra's orders, and be responsible for all inductions and grants.

The history of the orders, decorations, and medals of Vishwamitra dates back to the formal establishment of the honour system in April 2015 under the initiative of then education minister and former president Dhrubajyoti Roy, taking inspiration from the Indian honours system and forming the honour system in Friends Society. The Friends Society Ratna along with the other three decorations of the Ratna series were established and the first investiture were carried out on 15 April 2015, the nation's national day by then President Sarala Baishya. Ever since then, once every year the annual honours were announced and conferred on individuals for their merit and service. Several other medals were also issued to recognize the services and commemorate events. However, with the establishment of the Most Noble and Auspicious Order of the Commonwealth, the honours underwent a drastic change and the initial system lost much of its grace. The entire system established during Vishwamitra's republican era became defunct following the nation's transition to a monarchy on 8 June 2020 and no other appointments have been made to those awards since then.

On 24 October 2022, after deliberate consultations with the privy council, the Rashtradhyaksh through his royal decree disestablished the existing federal chivalric orders and created new set of honours. The move was initiated as a result of the decision to streamline the honours system with only having a few orders.

Dhrubajyoti Roy and Tanishkaa Patranabish, the two founders of the present-day honours system.

The present-day Vishwamitran honour system was established on 3 July 2020 by then Rashtradhyaksh Tanishkaa Patranabish through her royal decree 10-2021, and have been designed by Dhrubajyoti Roy. The honour system have been changed and reformed a number of times since then in order to present a well-maintained and well-designated system. The current system designates the monarch or the Rashtradhyaksh to be the Sovereign of all orders, decorations and medals of the nation as the fount of honour, while the deputy monarch or the Deputy Rashtradhyaksh to be the Grand Mistress. Provincial rulers and other nominated individuals occupy the position of Chancellor in the several orders. Several decorations and medals have been issued by the royal household and the government commemorating various events in the nation and also in order to recognize the outstanding and remarkable individual service to the nation and the welfare of the nation.

Honours are split into classes ('orders') and are graded to distinguish different degrees of achievement or service, according to various criteria. All appointments are made and approved by the monarch himself, however senior government officials and individuals may chose to nominate persons for the honours.

In addition, certain small lists are issued to appoint individuals to various national honours time to time. Nominations can be made by the members of the Conference of Rulers, the Prime Minister, members of the government, military, councillors and the dean of the diplomatic corps.

The current honours system was constituted on 24 October 2022 by His Illustrious and Royal Majesty Rashtradhyaksh Dhrubajyoti Roy through his royal decree. By the same decree, he also abolished the existing system which was first created by Rashtradhyaksh Tanishkaa Patranabish in 2020. The statutes of each order specify matters such as the size of the order, the use of post-nominal letters and insignia design and display.

The current honours system comprises of four orders of chivalric, all of which were established on 24 October 2022. The Supreme Order of the Hibiscus is the senior-most and most restricted honours of all.

The current honours system comprises of the Royal Vishwamitran Chain as the highest state decoration, followed by several service medals and the Tanishkaa Patranabish Medal for Excellence. The Tanishkaa Patranabish Medal for Excellence is only conferred on females who have rendered exceptional and most dedicated services to the community and is conferred once a year.

During the republican era in the history of Vishwamitra, then known as Friends Society, there existed a two-fold honours system which comprised of chivalric orders, with the first being created in 2019, and state decorations which were constituted in 2015 which also establishes the system of conferring awards to recognize contributions of the individuals for the state and the people.

The honours of Friends Society ceased to exist or became obsolete consequent to the transition of the nation to a monarchy in June 2020. They no more hold any validity and there has not been any inductions to those awards since the transition. Although, the recipients have not been revoked of their honours and are still mentioned in the records despite them giving up the public use of the honours.

The Order of the Jewels were a series of honours constituted in the same fashion of the Indian honours system which constitutes the Bharat Ratna, Padma Vibhushan, Padma Bhushan and the Padma Shri. The honours were created in April 2015 and the first induction took place on the National Day 2015.

The Friends Society Ratna was the highest conferrable award followed by the Padma Ratna, the Bhushan Ratna and the Shri Ratna. The honours existed from 2015 till 2019 when the last inductions were made. The honours became dormant thereupon. Following the nation's transition to a monarchy in 2020, the honours have no longer been conferred. Although, the recipients continued to possess the honours and are still considered to be parts of the system.

On 24 October 2022, Rashtradhyaksh Dhrubajyoti Roy after consulting the rulers of the states, the privy councilors and the members of the cabinet with intentions to streamline the honours system. Having received constructive advices from this advisors, the Rashtradhyaksh issued his royal decree to abolish the federal orders of chivalry and constitute a new set of honours. Following the abolition of the honours, the recipients ceased to hold them and were soon inducted to the new honours.

The honours which existed until the reforms of 24 October 2022 are listed under:

The order of precedence is followed during the wear of the honours or while listing the honours in the seniority order. All grades of the chivalric orders take a precedence over the decorations, and henceforth followed by the state medals and commemorative medals. Honours of the states (federal units) and the territories rank between the federal orders and are determined by the Central Chancery of the Chivalric Orders and the Rashtradhyaksh from time to time and under various situations through various notifications and orders.

The following list is that of the federal orders, decorations and other medals.

Light green denotes orders, decorations, and medals that are not open for nomination application.

Main article: Orders, decorations, and medals of the Vishwamitran states and territories

All the states of Vishwamitra except for Uttaranchal have their own internal honours system, though they differ in some ways from their federal counterpart. Kamrupa was the first to create its own honours in June 2020. However, after the establishment of the Vishwamitran honours system in July 2020, other states moved to initiate their own systems after the federal government refused to do so on their behalf. Similarly, the overseas territories have their own honours system which is only restricted to one chivalric order per territory. All the states and territorial honours rank below the federal honours in the order of precedence.

Other honours and appointments

The Vishwamitra nobility comprises of Vishwamitran individuals or families recognized as noble. The system of nobility in Vishwamitra is unique as compared to the other nobilities existing in the society. Individuals are conferred with noble ranks which consist of a three grade structure with dukes being the highest, followed by counts and then barons. The nobility in Vishwamitra was formally created on 27 December 2020 following recommendations made by a committee led by Isaiah David and David Augustus. Unlike most nobilities, the Vishwamitran nobility does not grant any territorial design or a post-nominal title to the nobles, but rather the nobles add the rank of the nobility as a prefix to their name.

Senior state officials and foreign sovereign monarchs are usually granted with the noble rank of a duke or a duchess, while the other titles are open for other individuals. Feudal lords or the administrators of the overseas territories are usually granted the rank of a baron and receive a noble rank soon after being appointed as an administrator. Non-citizens who receive the noble rank also receive honorary citizenship in the nation. 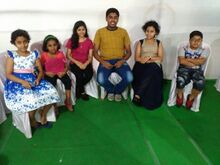 The National Hero of Vishwamitra[12] is the highest conferrable title in Vishwamitra which is conferred in recognition of the highest and most significant services to the nation and its foundation in several eras. The title was formally created on 22 December 2021 by Rashtradhyaksh Dhrubajyoti Roy. All recipients of the title are entitled with the highest privileges as decided by the Government of Vishwamitra and has been conferred mostly on national founders, including the three founders of the nation and the contributors to the process of transition to monarchy. As of 2022, the title has only been bestowed on nine individuals.

The Raj Ratna[13] (Gem of the Nation) is the highest civilian honorific title of the State of Vishwamitra which was constituted on 19 July 2021 by Rashtradhyaksh Dhrubajyoti Roy. It is conferred in order to recognize the highest and significant contributions made by individuals towards the nation. As of 2022, it has only been conferred on five individuals.

The Raj Bhushan[13] (Ornament of the Nation) is the second highest civilian honorific title of the State of Vishwamitra which was constituted on 19 July 2021 by Rashtradhyaksh Dhrubajyoti Roy. It is conferred in order to recognize the highest and significant contributions made by individuals towards the nation. It ranks below the Raj Ratna and has only been conferred on twelve individuals as of 2022.

Friend of the Nation

The Friend of the Nation is the highest honorific title in Vishwamitra which is conferred on a foreign individual for exceptional contributions to Vishwamitra as a whole— or to friendship with the monarch. The title was established on 26 April 2021[14] and is conferred in three grades of:

The National Artist of Vishwamitra is an honorific title in Vishwamitra which is conferred on an individual for exceptional contributions to the national symbols, art and culture of the nation. It was constituted under the National Titles Act of 2020 enacted on 13 September 2020, which allowed the state to bestow special titles on individuals on their depiction of the highest level of services and contributions to the nation and the crown. The title of National Artist is accompanied with special renumerations:

The title of National Artist has only been conferred on three individuals as of 2022: Ștefan Marius Snagoveanu, Abrams Wiucki-Dunswed, and Jayden Dagsa.[15]