He is widely credited as the founder of modern Gapla, and although this accreditation is not completely true, is officially recognized as one of the four founders of Gapla by the Gaplan government. He has also attempted to create his own state that failed in Parliament because of lack of territory. He is also a micronationalist that has participated in the Iana-Phoenix conflict and a one of the two historical leaders of the anti-Hubbardist (by some called Gaplan-nationalist) organization Hubbard Sucks along with Emma Bunnell.

Outside of micronationalism, he participates in competitive mathematics and competitive programming.

Although a newcomer to competitive programming, seeking to pass USACO Bronze this year, he is experienced in competitive mathematics. He has competed under the Russian flag at the International Mathematics Contest and Russian Mathematics Olympiad, winning a gold medal in each, as well as competing under the American flag at the United States Mathematical Kangaroo, winning second place nationally. He is the assistant captain of the Gaplan Mathematics Team, serving alongside famed captain Virat Varada.

Wyatt has participated in USACO under the Gaplan flag, with custom country identifier "GPL," but it is unknown if his scores will be validated and posted on the official website (with a Gaplan country code) due to the risk of elimination by authorities unaware of micronationalism. 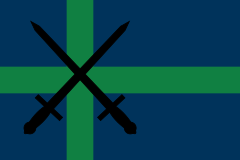 The following is a list of honors, domestic and foreign, received by Wyatt Baek:

All from the Federated States of Gapla.

From countries other than the Federated States of Gapla.

The following is a list of Wyatt Baek's historical political affiliations. He was never affiliated with any party in Korea. 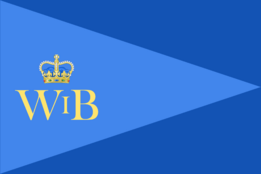 Wyatt's royal standard as the Sovereign Prince. The royal cypher is in the standard. Wyatt, in his capacity as Sovereign Prince of Gapla, under macronational laws controls the assets of Gapla, although a bill in Parliament may soon change that. He is also the session master of Gapla, the "gamemaker" of all of Gapla's interstate sessions.

He was the former President of Gapla, at one time in Gaplan history being simultaneously the monarch and the head of government. He was also elected as the Prime Minister in the 2022 Gaplan general election.

In this capacity, he has argued and advocated for the Free Rightist Party and against the People's Liberal Party, notably Chelsea Chen and visiting members of United States of the Terra Excelsior Republic. Due to his political views, he was banned from the Excelsioran discord server.