Danbury United Football Club (commonly referred to as Danbury United F.C, Danbury United or Danbury F.C.) is an Essexian professional football team based in Greater Danbury. They are set to compete in the EssexiAir Premier League in 2022, Essexia's first football league.

The club was the second to reach the minimum required players, after Great Baddow Rovers F.C., on the 18th February 2021.

The club was set up on the 17th February 2021 by Essexian MP Jack D. He envisioned a football league held domestically, and saw that clubs would need to be formed prior to any such event taking place. Named after the province that Jack resides in, Danbury United F.C. was Essexia's first non-international football club, and the first of any of Essexia's sports teams to have a custom uniform design.

The team was formed the following day on the 18th February 2021, and included 3 ex-Essexia FC players.

In mid 2021, a pitchero website was setup so that team news, photos and fixtures could be shared with fans as well as the league as a whole.

A non-profit merchandise shop was setup on the 8th December 2021 to allow fans to show support, but also so that the team could procure teamwear for affordable pricing.[1]

In early June 2022, the club sought to rebrand so as to have a more originally-sourced logo, and more links to the local community. After much discussion, a new roundel logo was created with a local church and oak tree in the centre, and the club shifted its colours from red, black and white to claret, blue and white.[2][3]

The club employs a small team of professionals to ensure the team are best prepared and mentally ready for every match. 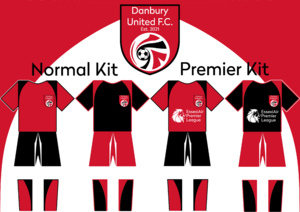 The club's first kit, featuring the DUFC colours. It was never produced due to the complex design, but set a precedent for other clubs to design their own kits.

The first kit was designed on the 17th February 2021, and featured sleek lines and curves. The home kit was mainly red, with black shorts and some white trimming on the inside of the shorts. The away kit was the same but in inverted colours.

The second kit was designed on the 6th December 2021 and was much simpler in comparison. The simplification was to allow for cheaper and simpler production costs. This would ensure all players could access the kit for an affordable price. The home kit was mainly white, with mid-length red sleeves. The away kit was black with short sleeves. The third kit (the first third kit ever designed for any Essexian football team) was red with short sleeves. Each shirt cost between £15-20, with the Away shirts costing more due to their being a dedicated active shirt material.

The third kit, designated the 2022 kit, coincided with the club's rebranding. The home shirt was now an Umbro Spartan claret and blue teamwear shirt, with a transfer-applied club logo as well as an embroidered shirt-maker logo. This greatly increased the quality, durability and presentation of the kit. However, due to the higher costs involved with producing this new kit, there was no third shirt. For this kit, the club also adopted a black and white captain's armband over the left arm, produced by Adidas.

Danbury United is sponsored by Essexia's largest defence contractors, CAe Systems and Paddocks Boat Co. These were gained due to the local area's links to these companies. The joint sponsorship was announced on the 21 February 2021.

As of 29 August 2021, Danbury United hasn't achieved any honours.