CAe Systems, also known as Cormorant Aerospace Systems, is an aircraft and defence manufacturer in the Commonwealth of Essexia. It was founded on 30 November 2020 just prior to the November 2020 MoD Keynote, and is involved in the International Aerospace Community.

The company is the only such example of another private organisation collaborating with EAST.

CAe Systems was founded by the Minister of Defence, the Rt Hon. Jack MP, on 30 November 2020 prior to the November 2020 MoD keynote. It was initially setup to oversee the design, construction and testing of the Joint Armed Forces Aircraft Program, which is an aircraft currently in design which aims to replace all current Essexian aircraft and operate with both the Imperial Essexian Navy and Imperial Army of Essexia. The company was setup with collaboration with EAST in mind.

Announced during the November 2020 MoD Keynote on 30 November 2020, the JAFAP program aims to construct an RC next-generation omnirole fighter that will be utilised by both the Imperial Essexian Navy and Imperial Army of Essexia. It was to feature:

No due date was announced, however it is widely believed to be completed in either 2021 or 2022. CAe Systems has announced that they are willing to work with international partners to complete the project.

The Essexian released an article on the 25th March 2021, announcing that CAe Systems had completed Phase 1 (the concept stage) of the JAFA Program the previous week, but released no further details.[1] The Defence Ministry of Poplar Nerva subsequently announced their interest in procuring a single F-3A 'Heron' T.1 for display/airshow purposes.[2] 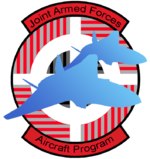 Program logo for JAFAP. It features the Essexian Air Assets logo and Low visibility variant in the background, and two blue-gradient stealth jet silhouettes in the foreground (Based upon the BAE Systems Tempest).