The Conservative Party is a center-right political party in Plushunia. It was founded in July 2019 by the conservative wing of the National Liberal Party, which broke away because of the Liberals' apparent lack of concern regarding cultural issues. The said conservative wing then became the Conservative Party, electing Reginald Koenig as its leader. The smallest party of Plushunia, it is mostly unable to run for election on its own due to limited resources, being part of the Liberal Alliance and running for elections on the said alliance's common list. It is currently in opposition.

The Conservative Party was formed in July 2019 from the more conservative wing of the National Liberal Party, which left the PNL following several disagreements regarding cultural issues. Led by Reginald Koenig, the party failed though to attract any then-MPs, so it remained outside the Parliament for the next few months. In the August local election, the party had a poor performance, only fielding candidates in 2 constituencies due to its lack of human and material resources, with the party only winning scores of 5-6% in the Mayor and Local/Regional Council elections alike. At the September 2019 legislative elections, the party ran independently (not joining/forming an alliance), yet only won 1 seat in the Parliament (5.71% of the popular vote), participating in a minority government (led by National Liberal leader Ghiță Purcel) with the Alliance of the Liberals and Democrats, government which was invested with the tacit support of the Social Democratic Party.

The Conservatives however went into opposition in mid October (accusing the government of being "too weak and incompetent" to deal with the civil conflicts that took place at the time), and joined the newly formed nationalist/conservative Unity and Dignity Alliance (AUD). In the October election, the party's candidates ran on the AUD list, the alliance winning 11% of the vote and 2 seats, one of which went to the Conservative Party. The PC's time in the AUD however ended in December, after ideological conflicts with the other parties in the alliance (which had more nationalistic and traditionalist political views, in contrast with the liberal conservatism/neo-conservatism supported by the PC), the party turning again towards the liberal parties, forming the PNL + PNȚCD + PC Alliance on 12 December with the parties of the now dismantled ALDe. Thus, the Conservatives returned to the governing coalition, gaining one Minister seat in the Purcel V cabinet.

The December local election was a success for the Conservatives, who ran as part of the PNL + PNȚCD + PC Alliance, which endorsed common candidates. Thus, one of the 5 constituencies (Plușurilor) in which the elections were held had an Alliance-endorsed Conservative candidate, Reginald Koenig, who went on to narrowly defeat Democrat incumbent Ollie Caracatița in the second round of the election. However, the reputation of the Alliance started to deteriorate throughout January and February, because of the heavy infighting and corruption that plagued the last months of the Purcel V cabinet, deterioration which accelerated after the cabinet was dismissed by a motion of no confidence and the opposition successfully forced snap elections. The said elections, held in February 2020, ended in a disastrous defeat for the Alliance, which only won 19.66% of the popular vote and 4 seats in Parliament, one of which went to the Conservative Party. 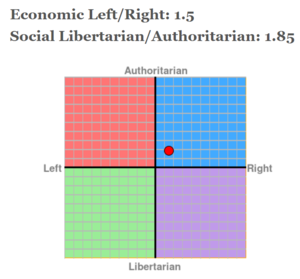 The position of the Conservative Party on the Political Compass chart

The Conservative Party is endorsing the economic policies of its longtime electoral partner, the National Liberal Party, supporting the development of the private sector and the privatisation of all public companies.