The National Liberal Party (Romanian: Partidul Național Liberal, acronym: PNL) is a liberal party in Plushunia. It is currently the second largest right-wing party in Plushunia and the third-largest party in Plushunia by number of seats in the Parliament. It is the largest party in the center-right Liberal Alliance, which is one of the two political forces taking part in the coalition supporting the incumbent Slobozan I cabinet. Having been founded in October 2017 by right-wing businessman Ghiță Purcel, it is one of the oldest Plushunian parties, being viewed as the political force that established right-wing liberalism as a strong ideology in the country. The party is known for having governed between October 2017 and June 2018 as part of the Democratic Convention, then again between April 2019 and February 2020 (when its leader Ghiță Purcel has served as Prime Minister) as the leading party of the Alliance of the Liberals and Democrats (the main actor in the multiple government coalition ruling the country in that period), and once again since July 2020, originally along the Social Democrats and National Democrats in the Slobozeanu I cabinet, and then alongside the Democrat Liberals as part of the coalition supporting the Slobozan I cabinet.

The first and oldest liberal party of Plushunia, the PNL has always been a strong supporter of the free-market economical model, being the first political force to push for the liberalisation of the economy, for reducing regulations for private enterprise and the privatisation of state-owned companies (which dominated the economy before the economic reform enacted by the Liberal-led Purcel V cabinet), the more radical members of the party (including ex-leader Ghiță Purcel) even supporting the privatisation of public healthcare and transport. 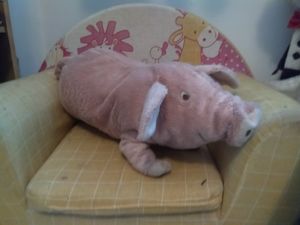 Ghiță Purcel, the founder of the National Liberal Party, regarded by many as "the father of Plushunian liberalism"

PNL spent July and early August 2019 in opposition, but it was mostly supportive towards Polarescu I cabinet's policies. However the situation changed the Liberals opened talks with the Democratic Party and the National Christian Democratic Peasants' Party to create an alliance and to endorse the same candidate for Vice Presidency in the 2018 Plushunian presidential election. The alliance was officially created on 30 July and was named the Alliance of the Liberals and Democrats. The alliance was initially a peaceful opposition, however the situation changed after the leader of the National Liberal Party, Ghiță Purcel, made a press declaration criticising the apparent lack of activity of the Polarescu II cabinet, with the situation worsening after the Social Alliance adopted a new, more Socialist government platform, which was meant to "put Plushunia on the road to Socialism". The Alliance of the Liberals and Democrats harshly criticised the new platform and called "all liberal-minded people of Plushunia" to participate in an anti-Government protest. The protest eventually took place on 14 September 2018, and was originally a peaceful protest. However, the Government, aware of the potential threat from the protesters, sent the Plushunian Security Forces to suppress the protests. Surprisingly, the protesters decided to fight back, outnumbering and overwhelming the Security Forces and starting the civil conflict which came to be known as the Plushunian Civil War. During and after the Plushunian Civil War, the party tacitly supported the rebels and their ideals: the immediate termination by the Government of the attempt to turn Plushunia into a state with a Socialist economy.

Postwar, the party remained in opposition, since the peace agreement that ended the war stipulated that the Polarescu II cabinet will remain in power for some months to maintain political stability in the country. However, following the events of the "March coup", the Plushunian 2019 snap legislative election took place, with the Liberals and the Alliance of the Liberals and Democrats promising that they will get the country out of the postwar devastation and economic crisis. This programme was highly successful, the Alliance of the Liberals and Democrats winning a plurality in the election and forming a coalition with the Save Plushunia Union.

As the leading party of the Alliance of the Liberals and Democrats, the PNL played a major role in governing the country, with its leader, Ghiță Purcel, being proposed by the ALDe - USP coalition and nominated by the President to become Prime Minister of Plushunia, forming the first center-right government (which was invested by the Parliament on 30 March) since June 2018, Purcel also being the first Prime Minister to come from the National Liberal Party. The Liberals remained in government until February 2020, successfully reforming the Plushunian economy and seeing it go from a state-controlled Socialist economy to a free-market one. However, the Liberal government failed to insure the stability required for most reforms, Ghiță Purcel becoming notorious for forming and breaking coalitions every few weeks. By autumn 2019, despite losing both the September and October elections, Purcel and the Liberals were still in power, with help from the Social Democrats. This unlikely coalition finally gave Purcel the time and stability needed to apply his reforms, with the economy recovering from the post-Socialist economic crisis and growing fastly. Meanwhile, the Liberal cabinet enacted a large-scale economic reform and liberalization throughout late October and November 2020, with public companies being privatized and incentives such as tax cuts being provided to private investors. Those measures, combined with a boom of the housing, constructions and retail sectors and several government-funded infrastructure projects led to a period of prosperity and fast economic growth between October 2019 and January 2020. Furthermore, the Liberals also enacted an administrative reform, greatly diminishing the amount of bureaucracy, streamlining local administration, and eliminating the local councils (with the Mayor, the Deputy Mayor and the Local Secretaries being now the only administrative offices in the local administrations), and oversaw the annexation of New Plușenu. Following the administrative reform, the Purcel V cabinet called local elections, which were held in late December and in which the PNL + PNȚCD + PC Alliance won 2 seats, after a strong campaign led by the Prime Minister Ghiță Purcel, the main campaign message being that the Liberals may be the governing party, but Liberal mayors in the local communities will be needed too in order to fulfill the reform plans.

The last months of the Liberal government however became plagued with corruption, influence peddling and cronyism, and the PSD (which benefited greatly from the state-owned companies, which were still full of sinecures left from the Socialist era) opposed completing the economic reform. The coalition with PSD also caused a split within the party, with many members opposing the continuation of the coalition and thought the party should re-orient itself towards the other right-wing forces. Purcel did not comply to their demands, however he was soon overthrown by a motion of no confidence launched by the Democratic Party, then in opposition, motion which passed with the help of the dissidents from PSD and PNL. A state of political gridlock followed, and the anti-PSD liberals left the party, forming the Liberal Democratic Party. This would be a fatal blow for the already weakened PNL and its partners from the PNL + PNȚCD + PC Alliance, which together just 19.66% of the vote in the Plushunian February 2020 snap legislative election (which were forced by the resignation from the Parliament of the Democrat MPs and their allies, which held together 50% of the seats in the Parliament, thus leaving the Parliament with less than 50%+1 of its members, the minimal number required by the Constitution in order to function).

Weakened by their and their allies' defeat in the February election, the Liberals found themselves in opposition for the first time since Ghiță Purcel became Prime Minister on 1 April 2019. The corruption and cronyism which dominated the last months of Liberal rule still stained the party's and the PNL + PNȚCD + PC Alliance's reputation, the latter further dropping in polls until reaching 17%, a historical low. The Alliance continued to have a poor performance in polls throughout the next months, and by late May several younger Liberals, led by Ludovic Purcel, decided that the only way to revive the party was to get rid of the harmful legacy of the Purcel era and reform the party. This reformist movement quickly gained great influence within the PNL, even removing Ghiță Purcel from the office of Party President on 1 June and replacing him with an interim collective leadership council comprising Ludovic, Porculete and Hortensia Purcel. The new leaders (especially Ludovic Purcel, who eventually became interim Party President on 17 July) focused on improving the party's damaged public image, establishing it as "a viable center-right alternative to the Democratic Liberal government and its many blunders (such as the poor management of the coronavirus pandemic and of the subsequent economic crisis)". 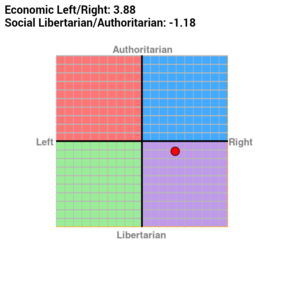 Position of the National Liberal Party on the Political Compass chart

The party (and most importantly its former leader Ghiță Purcel) has always been a strong supporter of classical Liberalism, being well known for advocating for the creation of a genuine free market economy in Plushunia, for the reducing of the state's role in the economy, lower taxes, encouragement of private enterprise, reduction of restrictions on private companies, eliminating the role of labor unions in administration of companies and the privatisation of all public enterprises. The Liberals also oppose bureaucracy and "big government", one of its greatest achievements (aside from the economic liberalisation and privatization which took place in late 2019) being the administrative reform of November–December 2019, that eliminated many redundant public offices and sinecures left from the Socialist era. streamlining the public administration of the country.