The Plushunian Parliament (Romanian: Parlamentul Pluşuniei) is the legislative assembly of Plushunia. It meets in the Palace of the Parliament monthly (in the last Sunday of each month), but it can be convocated in extraordinary sessions by the President, President of the Parliament or the Government.

It is a unicameral legislature based on principles of representative democracy, consisting of 31 members elected for a 6-month term through a mixed-member majoritarian system (20 MPs being elected by means of a proportional-party list system from a single nationwide constituency, the seats being distributed by the D'Hondt method, and the 11 remaining seats will be occupied through a first-past-the-post system from 11 electoral constituencies), according to the July 2020 amendments to the electoral law (and the further modifications made in early 2021). Previously, the seats were distributed only proportionally using the Hare quota (2017, 2018, March 2019 and February 2020 elections) and Droop quota (September and October 2019 elections) systems. The Parliament is chaired by the President of the Parliament, who convocates the normal sessions and establishes the daily agenda for each session.

The history of the Plushunian Parliament starts in November 2017, soon after the foundation of the country, when the first legislative election in Plushunian history was held. The center-right Democratic Convention went on to win over 50% of the votes and seats in the legislature, and thus the President nominated a Prime Minister from the Convention, with a no-confidence vote from the Parliament (the country didn't have a constitution at the time, and the political proceedings weren't properly defined). However, due to the high political and social instability during the next months, the Parliament, established as a 25-member unicameral legislature whose members were elected proportionally from a single nationwide constituency wasn't convocated until June 2018, the Government taking over legislative duties until then. By June 2018, the lawmaking process, the status of the legislature, the Prime Minister appointment process and the separation of powers became more clear and established, even though Plushunia still had an uncodified constitution, and the Parliament, now a 30-member unicameral legislature, started meeting and passing laws on a regular basis after the 2018 elections.

The unicameral system remained in place for the June 2018 - March 2019 and March 2019 - September 2019 legislatures, until being replaced with a novel, bicameral system after the adoption of the August 2019 constitution. Thus, the Parliament's member count decreased to 25, and a second legislative body, the Regional Council, was established, the Council being a Bundesrat-style legislative body where all regions had equal representation. However, the bicameral system was short-lived, only lasting for two months before the country returned once again to unicameralism following the October 2019 constitutional reform. The Regional Council was disestablished and the Parliament's number of members decreased again, the October 2019 - February 2020 and February - August 2020 legislatures only having 20 members.

Yet another reform of the Plushunian Parliament was undertaken in July 2020, the number of seats increasing again to 25 and the voting system changing for the first time from complete proportional representation to a mixed-member majoritarian (parallel voting) system. Thus, each voter will have now two votes, participating in two simultaneous elections: one for the 17 seats of the Parliament that are distributed through party-list proportional representation, and the other for the remaining 8 MPs, who are elected from 8 single-member constituencies through the first-past-the-post system. The reform will come into force starting from the September 2020 legislative election, which will take place in an aforementioned manner. 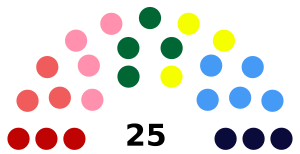 Structure of the First Legislature at the beginning of its term 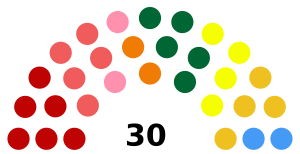 Structure of the Second Legislature at the beginning of its term 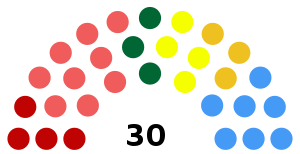 Structure of the Third Legislature at the beginning of its term 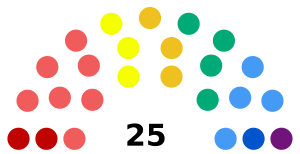 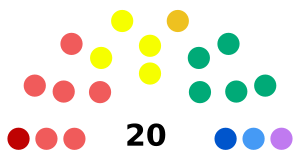 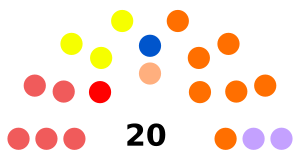 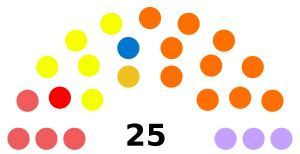