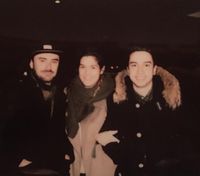 September 2017: Titianus II in a rare public appearance with Great Vicar, Ilaria Comici, and the newly-elected President of the Governatorate, Giovanni Alesi

Titianus II was born in Pordenone, and has lived since childhood in Vignetia. Federico Marcuzzi Z. Z. is a member of Yunivers since its foundation. In 2008 he chaired the commission for choosing anthem and national symbols. He served as judge in the Tribunal of the Decracy of Yunivers since 2010 and as Supreme judge of the Suprema Provvidenza court since 2011. In 2013, after Claudio Zannier resignation, he has been elected Noble of Vignetia and then Sovereign of the Decracy of Yunivers by the Conclave 2013. After the resignation of Claudio, turns out to be the last heir of the House Zannier, the House of his maternal grandmother. He is also heir of the House Zappi, a minor House of Vignetia. The Marcuzzis, however, his father's family, are not a family of Yunivers.

His parents, Lucia Zappi Zannier and Enrico Marcuzzi, divorced in 2009. He haves an heterozygote twin brother, Alessandro.
His predecessor as Sovereign, Claudio Zannier, is his cousin from his mother's side.

Titianus II during his first speech

Federico Marcuzzi has been elected by the Conclave 2013. The Conclave began the 11th May 2013, and has been sealed by the Camerlengo Simone Spadone. The participants Nobles were: Lorenzo De Biasio, Federico Marcuzzi, Martina De Stefanin, Nils Tedeschi, Ilaria Comici, Angelica Neumer and Alice Zanori. Everything that happens in the conclave is secret, but there are reliable reconstructions of the ballots. Below there's the one considered more reliable.
The white smoke announcing his election was held at 10:45. The announcement was made by dean Noble, Lorenzo De Biasio, at 12:35 am from the main balcony of the Central Protectorate Palace.

Titianus II took possession of the Regency Office with the Insediamento ceremony on 13 May 2013. He has repeatedly stated that he intends to make several reforms. In June 2013 it was announced that he had begun working on a law for freedom of worship, that entered into force in October. He also reformed some articles of the law about 'Citizenship, Residence and Access'. He also made ​​a major reform of local authorities, making the system more democratic and establishing the 'House of Representatives' in parliament.

His full titles as Sovereign are: Sovereign of the Decracy of Vilthia, Regent of the Central Protectorate, Protector of the Homeland, Successor of Hermann, Lord of Vignetia, Grand Master of the Brotherhood of Saint Sebastian, Commander in Chief of the Vilthian Armed Forces.

The Vilthian traditions require that each Sovereign should be equipped with a personal seal, designed according to pre-established parameters (although the Sovereign is free to personalize the salient features).
Titianus II adopted as a seal a golden eagle (a black eagle is the symbol of the House Zappi) on a red background (from the seal of the House Zannier).
The eagle wears a 5-pointed crown around the neck (as the Vilthian Crown in tradition) and has on his chest a shield representing the Central Protectorate. Between the legs it has two cornucopias, a symbol of abundance and wealth.
The personal seal accompanies, together with the signature, every act issued by the Sovereign and it is necessary to prove its authenticity.
Otherwise, the monogram has no legal value and is not provided for by any official legislation, although every sovereign has its own.
The personal monogram of Titianus II is "I T I", the personal monogram as Noble was "F / Z".

Since early 2015, due to the fact that Titianus not appeared publicly since the month of September 2014, many have begun to think that he might have left the office. According to some theories, his resignation would be withheld to ensure the stability of the Central Protectorate. In March the Press Room has released a video message in which the Sovereign apologized publicly, and assured to be still in place. The video explains how Titianus was overburdened with personal commitments also related to the study.
Many have pointed out that in the video, Titianus did not wear the Royal Ring, symbol of the Regency of the State. This has fueled further theories about it, but no confirmation or denial has come from the Central Protectorate. Even in the official portrait of the year 2015, Titianus' not wearing the ring with his royal seal.