The Vicarial Guards are the honor guard of the Sovereign of the Decracy of Vilthia and of the Central Protectorate palace. They are the only institution in Vilthia remained unchanged since the days of the ancient feud. 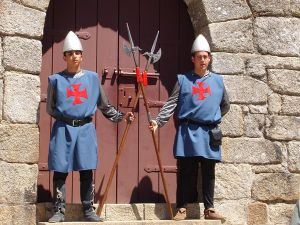 Their task is to guard the entrances to the Central Protectorate Palace. They're also the personal guards of the King. Although their important role, have now become a purely ceremonial body.

The Vicarial Guards were the armed wing of the Pinzon's Feud, and their existence is proved by documents since 1200. Probably, were dismantled after the fall of Pinzon's Lordship. The ancient writer Degani, described them: